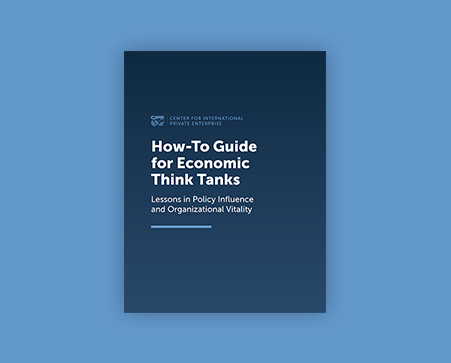 This How-To Guide for Economic Think Tanks: Lessons in Policy Influence and Organizational Vitality captures insights from the experience of the Center for International Private Enterprise (CIPE) and its think tank partners from around the globe. CIPE’s mission is to strengthen democracy around the globe through private enterprise and market-oriented reform, fulfilling our vision of a world where democracy delivers the freedom and opportunity for all to prosper. CIPE does this by partnering with local business associations, chambers of commerce, universities, think tanks, and advocacy groups to advance democratic and economic reforms worldwide. CIPE is headquartered in Washington, D.C. and currently has regional offices and representatives in more than a dozen countries, as well as a vast network of partners past and present.

Over the past three decades, CIPE has supported independent economic think tanks to help them become leading voices of reform in emerging democracies and closing spaces for civil society. For example, in 1997 with CIPE support, Riinvest in Kosovo began a landmark policy study that introduced a new standard of polling and analysis for economic planning, and helped form and train ten new business associations. In Nepal, CIPE worked with Samriddhi Foundation to develop the Nepal Economic Growth Agenda (NEGA), an annual effort since 2011 to identify short-term as well as long-term policy bottlenecks that hinder Nepal’s economic growth. Samriddhi’s recommendations continue to be implemented and its economic research has become an important source of independent policy analysis. CIPE and Centro de Implementacion de Politicas Publicas para la Equidad y el Crecimiento (CIPPEC) in Argentina have collaborated to promote good governance and anti-corruption reforms in state-owned enterprises (SOEs) in the region and business globally as part of the Think Tank (T20) process of the Group of 20. In 2018, CIPPEC contributed directly to the development of recommendations for the G20 Anti-Corruption Working Group on “Promoting Transparency and Anti-corruption in State-Owned Enterprises,” which led the G20 countries to recognize the importance of addressing integrity in SOEs.

The How-To Guide for Economic Think Tanks is aimed to inspire new and nascent think tanks around the world to be a part of the solutions to the world’s greatest challenges. It shows examples of think tanks that have distinguished themselves in challenging political and economic environments and that there are lessons to be learned from their experiences. Without making light of the challenges, it is often in these environments that the talent, ideas, and credibility of think tanks are most needed and most influential. While young think tanks can nimbly navigate many problems, this guide gives them a grounding to orient themselves, build supportive relationships, and assert their voices.

The Center for International Private Enterprise wishes to thank our partners featured in this resource who graciously gave their time and shared their stories with us. We are inspired by the work you do and the work of all our think tank partners across the globe and look forward to supporting your ongoing efforts to shape inclusive, democratic societies that deliver prosperity for all. CIPE and its partner think tanks have contributed to good governance, policy analysis, and reforms at the local, national, regional and international levels. 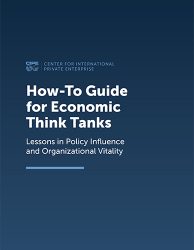