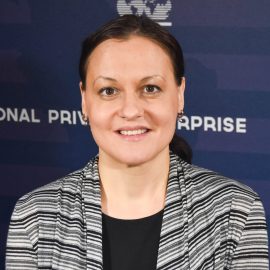 Ekaterina (Katya) Lysova is a Senior Program Officer for Eurasia at the Center for International Private Enterprise. She has over 15 years of experience working on issues of media freedom, civil society development, and anti-corruption in the former Soviet Union. She worked as a media lawyer for an IREX project supporting independent media in Russia, served as a Eurasia media law consultant for Freedom House and the Committee to Protect Journalists in New York, and conducted her two-year project on Russia’s media and security sector reforms at the University of Cologne as a German Chancellor Scholar.

Prior to joining CIPE, Lysova specialized on corporate integrity compliance and fraud & corruption investigations while working as a lawyer for TRACE International and the World Bank’s Integrity Vice Presidency (INT). Lysova received her Ph.D. in law at Far Eastern Federal University in Vladivostok, Russia, and holds a Master’s degree from Georgetown University School of Foreign Service with a focus on international development. Lysova is a native Russian speaker, fluent in English, and proficient in German.

By Katya Lysova on the Anti-Corruption & Governance Center:

How Can Collective Action Support Ethical Companies? A Perspective from the Clear Wave Initiative from Lithuania with Ieva Lapeikiene

COVID-19 and Corruption: IMF and World Bank Responses to COVID-19

Democracy that Delivers #322: Sinking Corruption in Sea-based Trade, with the Maritime Anti-Corruption Network