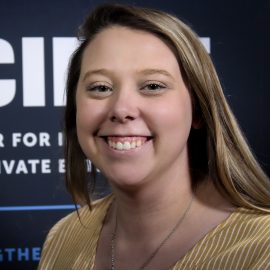 Dana Lee Barringer is a Program Officer for the Latin America and the Caribbean team at the Center for International Private Enterprise (CIPE) in Washington, DC. She manages programs for CIPE in Mexico and Venezuela as well as regional programming in Brazil and Argentina. In prior roles, Barringer worked at the U.S. Department of State with the Bureau of International Narcotics and Law Enforcement (INL) where she supported the Central America Regional Security Initiative and monitoring and evaluation efforts under the Biden administration’s Strategy to Address the Root Causes of Migration in Central America. She also previously worked at CIPE as a Program Associate and later as an Associate Program Officer covering the Central America, Ecuador, and Venezuela portfolios and assisted with the expansion of the LAC team’s women’s economic empowerment portfolio.
Barringer earned a B.A. from The George Washington University in International Affairs and Spanish & Latin American Languages, Literatures and Cultures concentrating in Latin America and minoring in public health. She is also currently pursuing a M.A. in the Field of International Development Studies at The George Washington University.

Cut from the Same Cloth: Entrepreneurship in Guatemala