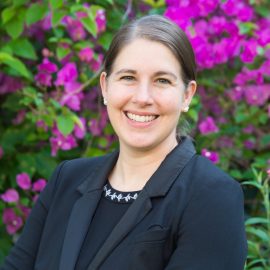 Connie Gonzalez serves as the Deputy Director for the Center for Women’s Economic Empowerment (CWEE), based in El Salvador. Gonzalez leads funding from the National Endowment for Democracy promoting women leaders globally and has managed other projects funded by the U.S. Government and other donors.

Prior to CIPE, she served as Partnership for Growth and Alliance for Prosperity Lead and Senior Strategic Advisor at the U.S. Agency for International Development (USAID) in El Salvador. Previously, she worked at USAID/El Salvador on Monitoring, Evaluation and Learning, and as a Gender Advisor. Prior to joining USAID, Gonzalez served as Gender Consultant at the Office of U.S. Foreign Disaster Assistance (OFDA) Latin American and Caribbean Regional Office in Costa Rica; Director for Latin America, Portal de Microfinanzas at the INCAE Business School Latin American Center for Competitiveness and Sustainable Development in Costa Rica and managed a World Bank-funded microfinance education management project in Costa Rica; among other roles.

Gonzalez earned her BA in Spanish from Dartmouth College, an MA in Latin American Studies from The George Washington University; and a Certificate in Non-profit Management from the University of Illinois at Chicago. She recently completed certificates in Women’s Leadership from Yale School of Management and Wharton Executive Education.

Empowerment as a Catalyst for Democracy Support and Economic Recovery