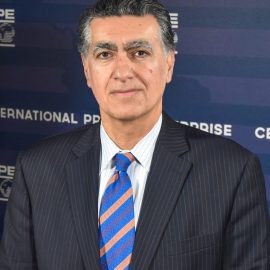 Babak Yektafar is a Senior Program Officer for the Middle East and North Africa at CIPE where he works on private sector and ecosystem reform. Yektafar has been working on issues including corporate governance, anti-corruption compliance, open data, entrepreneurship, and business agenda development since 2009.

Prior to that, he worked at the Washington based think-tank, World Security Institute, where he founded and was the editor-in-chief of Washington Prism, a weekly online journal of culture, politics, economics, and public affairs. From 1999 to 2005, Yektafar was a senior producer with C-SPAN network’s national live morning program, Washington Journal. He has appeared on CNN, BBC, C-SPAN, PBS, and numerous other media outlets and has produced articles for publications such as World Policy Review and Foreign Policy.

An Opportunity for the Economic Empowerment of Women Athletes

Democracy That Delivers #160: Dr. Bijan Khajehpour on Sanctions on Iran and its Effect on The Private Sector

Democracy that Delivers Podcast #22: Babak Yektafar on the Economic Situation in Iran and What Drives Regime Policies