The Biden administration wants to make 2022 a year of action to promote democracy and opportunity. That, of course, is CIPE’s reason for being.

The administration’s first step was hosting a virtual Summit for Democracy in an effort to reassert the leading role the United States plays in encouraging and defending democracy around the world. As the linkages between democracy, markets, and the private sector have become central to the global debate, we at CIPE have been using the weeks surrounding the Summit as a platform to extend our views on the subject matter. 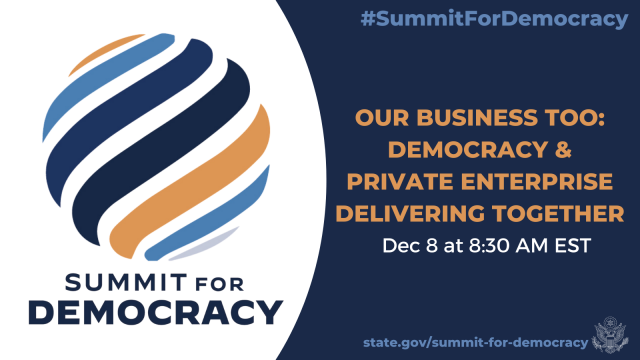 Before the official opening, CIPE participated in an official Summit for Democracy Day Zero event, a Private Sector Forum called “Our Business Too: Democracy and Private Enterprise Delivering Together.” It centered on a constructive dialogue around the symbiotic relationship between business and government, and the roles and responsibilities of each in advancing society-at-large. Commerce Secretary Gina Raimondo hosted a keynote panel with Google & Alphabet President of Global Affairs Kent Walker and Stripe CEO Patrick Collison, followed by a series of discussions with executives and thought leaders from around the world on digital space, beneficial ownership and transparency, and responsible investment (constructive capital).

CIPE was a key partner to the administration in organizing the two-hour event, which featured many of our programs either directly or indirectly, and I moderated. The forum provided a rare opportunity for CIPE to help shape the discussion about business and democracy, and we expect to continue pressing on these themes in the years ahead.

CIPE participated in an official Summit for Democracy Day Zero event, a Private Sector Forum called “Our Business Too: Democracy and Private Enterprise Delivering Together” ahead of the Summit itself.

In a separate Day Zero event, CIPE’s Chairman, Greg Lebedev, was a speaker on the NED panel “Rebuilding Democratic Momentum” moderated by NED Board Chairman Ken Wollack. Other panelists included NDI Chair and Former Secretary of State Madeleine Albright, IRI Chair Senator Dan Sullivan, and Solidarity Chair Liz Shuler. A transcript of his remarks is posted on the CIPE website. They brought home the important relationship between business and democracy in his inimitable style and rounded out a great discussion.

CIPE kept the momentum going by holding several follow-on events related to the Summit. On December 14, CIPE hosted a Free Enterprise and Democracy (FEDN) event “Priorities for Democracy that Delivers: Voices from Emerging Markets.” FEDN members examined how open market economies and business contribute to democracy that delivers, through the lens of the three Summit for Democracy themes: defending against authoritarianism, fighting corruption, and promoting respect for human rights. A FEDN “Call to Action” is setting the parameters for democracy promotion.

Expanding our outreach at the regional level, CIPE’s Asia team participated in a series of programs on a popular Bangladesh television show focusing on the pillars of the Summit. Here are links to those broadcasts:

In the years ahead, CIPE will find new ways to support and promote democracy and opportunity, just as we have since our founding in 1983.