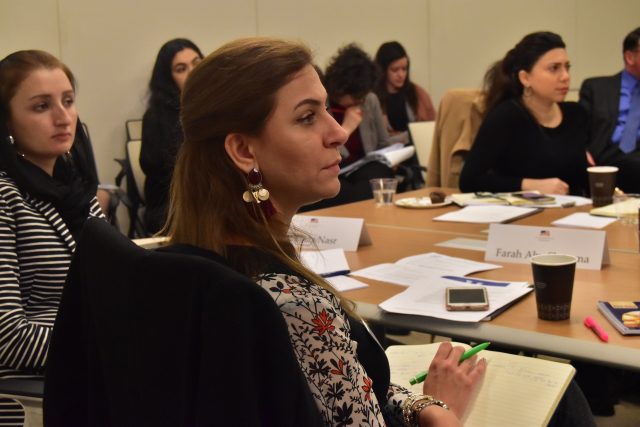 Jordan has made great strides toward gender equality, especially with an education system that ensures equal access for men and women. As a result, Jordan has a highly educated female population. According to Jordan’s Department of Statistics, 93 percent of females aged 15 years and older were literate in 2017. In addition, more Jordanian women were enrolled in university in 2016 than men.

Despite these high numbers, women’s participation in the workforce is extremely low. In 2017, only 17 percent of Jordanian women were economically active (seeking work, whether employed or unemployed), compared with 59 percent of men. While the wage gap plays a large factor in these low rates, societal beliefs also pigeonhole women. For example, the education sector is considered a socially acceptable job for females—a sector also known for low wages and limited opportunities.

Women are also held back economically due to time poverty, or lack of adequate time for self-care and development for women who remain exclusively responsible for unpaid care work at home; lack of childcare services; and cultural constraints on female mobility in society. These challenges are further compounded by a lack of reliable, safe, and accessible public transport.

Despite quotas for female inclusion in national and municipal bodies, political participation remains limited. Women account for only one-sixth of the seats in Jordan’s parliament. Though support for improvement exists, resources are lacking.

In 2018, Jordan’s Minister of Labour announced the government had developed an executive program aimed at increasing female participation in the labor force. During this announcement, he said, “Advocating for the employment of women is a successful step to combat poverty and walk toward progress.” He also mentioned the government adopted several measures to support women. One such effort was establishing nurseries in the private and public sectors to encourage women to enter the workforce.

However, to continue prioritizing the improvement of women’s status, female stereotypes and gender bias needs to be addressed in local communities.  I am currently managing the Women’s Economic Empowerment (WEE) project under the Economic Justice and Gender Justice departments at Oxfam in a remote area of Jordan’s southern region. These women face even greater pressure to adhere to specified gender roles. They are expected to be dependent on their spouse and comply with patriarchal tribal rules. Such social and cultural barriers to women’s economic empowerment in Jordan are reinforced by deficiencies in state policy and employer-level gaps in expanding the scale and type of job opportunities available for women.  This is why Oxfam’s WEE program is working to:·   Develop female self-confidence·   Provide training on how to negotiate and make decisions·   Engage with men, families, and the community to build understanding and support for women’s participation and leadership in economic and business activities·   Provide evidence-based advocacy on gender roles and unpaid care work as impediments to women’s economic empowerment

By adopting a holistic approach, we seek to raise awareness and commitments to find solutions.

For instance, Um Mohammad, a woman from the northern Jerash governorate, is working from her home on hand-woven products to support her family. However, she is facing difficulties accessing finances, basic services, and internet—all important tools to market and grow a business. Um Mohammad’s story is similar to many other women who are in need of investment, skills, and services as they aspire to fulfill their potential.

My participation in the George W. Bush Institute’s WE Lead program reinforced my understanding of how leadership can create sustainable change and how all women should have opportunities to participate in the economy and reap the benefits of our participation. I learned that my role as a community leader strengthens economic inclusion—a topic we discussed in depth through the Center for International Private Enterprise (CIPE)— which entails access without bias to markets, resources, and opportunities.

It’s a huge responsibility that I want to relay to other women so they can, themselves, become leaders and decision makers in their homes, communities, and governments. We all have a responsibility to speak up for our rights and support positive changes in policy, practices, attitudes, and access.

Farah Abu Shamma is a Bush Institute WE Lead Scholar.

Democracy that Delivers #260: Corruption at the Root of Afghanistan’s Chaos with Ikram Afzali of Integrity Watch Afghanistan