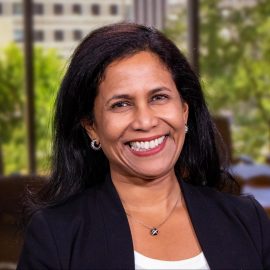 Ruchi Bhowmik recently joined Netflix as Vice President of Public Policy, developing strategy for the Netflix relationship with key stakeholders, including regulators, non-governmental organizations, and elected leaders, in the United States and Canada. A US-based company with operations in over 100 countries, Netflix is a leader in the entertainment streaming industry.

Prior to joining Netflix, Ruchi was Global Vice Chair – Public Policy at EY and had responsibility for the firm’s public policy operations in more than 150 countries. As Global Vice Chair, Ruchi focused on shaping the firm’s strategic direction and position on regulatory and public policy, leading a team that engages with a broad range of stakeholders around the world, contributes to policy debates and provides insights and perspectives on issues across audit, tax, corporate reporting and corporate governance as well as digital innovation, artificial intelligence, data privacy, cybersecurity and the future of work.

She previously served as the Senior Vice President for Global Public Policy and Government Affairs for PepsiCo where she led the company’s efforts to protect and promote its product portfolio and innovation initiatives. Between 2013 and 2017, she was at EY, serving as Director of Strategic Initiatives in the Office of the Global Chairman. In this role, she worked closely with then-EY Global Chairman and CEO Mark Weinberger in executing an ambitious growth strategy. She spearheaded EY’s involvement with the Coalition for Inclusive Capitalism to develop the Embankment Project for Inclusive Capitalism.

Prior to entering the private sector, Ruchi served in multiple senior-level roles in the United States government, including serving as President Barack Obama’s Deputy Cabinet Secretary and Special Assistant to the President for Policy in the Office of the Chief of Staff. During her time at the White House, she served on the White House Council on Women and Girls and led White House policy proposals and public-private partnerships for a broad range of issues including innovation, manufacturing, and workforce development. She previously served as the Legislative Director and Counsel for then-Senator Obama and Judiciary and Education Counsel for Senator Ron Wyden – advising on issues like intelligence and national security, privacy, civil liberties, and cybersecurity.

As a litigator, early in her career, she focused on international trade and gun violence prevention, including working with the Brady Center to Prevent Gun Violence and the Legal Action Project.

Ruchi served as a member of the Executive Consultation Group of the Blue Dot Network for the Organisation for Economic Cooperation and Development (OECD) under the U.S. Department of State’s auspices and was a member of the G7 Impact Transparency Project, focused on transparency issues around environmental disclosures as part of COP26. She is a member of the Advisory Board of the Center for Global Affairs at New York University and the Board of the DC Public Library Foundation.

She previously served on the boards of the World Policy Institute and the Women’s Hi-Tech Coalition. She was honored by the South Asian American Bar Association as the Legal Professional of the Year in 2012.

She holds a B.A. in History from Yale University and received her J.D. from the University of Virginia. Ruchi lives in Washington, DC with her husband and two children.