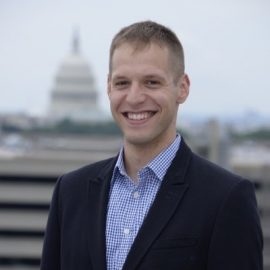 Matt Manousoff joined CIPE as Senior Program Officer in 2021. He serves as the head of operations and chief of staff for CIPE’s trade team, which supports governments in developing and least-developed countries in implementing the World Trade Organization’s Trade Facilitation Agreement.

Prior to joining CIPE, Matt was Head of Program Management at the British Embassy in Washington DC, where he led programs that supported UK-US bilateral trade, investment, and regulatory dialogue. Previously, Matt was program specialist at the American Bus Association, and he has also held various roles and internships in Brussels at the European Parliament and the US Embassy, and in DC at the EU Delegation and the German Marshall Fund.

Matt holds an MA in Public and International Affairs from the University of Pittsburgh, and a BA in Economics from Virginia Tech.