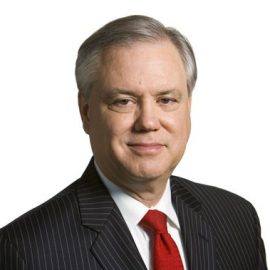 Kim R. Holmes served at The Heritage Foundation for more than three decades, first overseeing the Foundation’s defense and foreign policy team for more than two decades, and then serving as Executive Vice President from 2018-2021.

Holmes has written about America’s place in the world and the changing political landscape, and many of his recommendations have become U.S. policy. His widely published works include the internationally acclaimed Heritage Foundation Index of Economic Freedom, his 2008 book Liberty’s Best Hope: American Leadership for the 21st Century, 2013’s Rebound: Getting America Back to Great; and Closing of the Liberal Mind: How Groupthink and Intolerance Define the Left, published in 2016.

Recognized around the globe as one of Washington’s foremost foreign and defense policy experts, Holmes is a member of the Council on Foreign Relations, where he formerly served on the Washington Advisory Committee. He is also a Member of the Board of Directors of the Center for International Private Enterprise. On August 1, 2019, Dr. Holmes was confirmed by the Senate to the National Council on the Humanities.

While at the State Department from 2002-2005 as Assistant Secretary of State for International Organization Affairs, Holmes was responsible for developing policy and coordinating U.S. engagement at the United Nations and 46 other international organizations. Important goals achieved at that time included the U.N. mandates enabling Iraq to make the transition to democracy; the Security Council’s first binding nonproliferation resolution; the U.N.’s first mandate requiring the Office of Internal Oversight Services to release reports to member states; an international outcry over Libya’s assuming chairmanship of the Commission on Human Rights, which culminated in that body’s refashioning; and establishment of the U.N. Democracy Caucus and U.N. Democracy Fund.