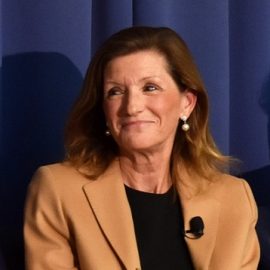 For nearly twenty years Karen Kerrigan’s leadership and advocacy has helped foster U.S. entrepreneurship and global small business growth. She is president & CEO of the Small Business & Entrepreneurship Council, and is the group’s chief advocate.

Kerrigan regularly testifies before the U.S. Congress on the key issues impacting entrepreneurs and the economy, and has been appointed to numerous federal advisory boards including the National Women’s Business Council, the U.S. Treasury’s Taxpayer Advisory Panel, and the National Advisory Committee for Labor Provisions of U.S. Free Trade Agreements. Kerrigan has presented at several Presidential economic summits, and scores of other forums hosted by the White House, Small Business Administration, Securities & Exchange Commission and other federal agencies. She has written hundreds of Op-Eds and newspaper columns, and regularly appears on national television and talk radio programs.

Kerrigan has been called America’s “entrepreneurial envoy” and “small business ambassador” for her extensive work overseas. She is a founding member of the World Entrepreneurship Forum, and provides counsel to governments and business associations across the globe regarding entrepreneurial development, capacity building and policy formation. Kerrigan is a board member and former chair of the Center for International Private Enterprise (CIPE).

In 2013, 2012 and 2011 she was honored with the Champion Small Business Influencer award by Small Business Trends. CEO Magazine named Kerrigan a Top Ten Woman in U.S. Crowdfunding in November 2013, and she has been designated a Top 100 Global Thought Leader on Crowdfunding by Our Crowd in January 2014. In November of 2009 she was presented with the “Small Business Advocate of the Year” award by the NY Enterprise Report, among other accolades, Inc. Magazine named Kerrigan to its small business “Best Friends in D.C.” (2006) list as a “power broker and activist” with “serious clout” for entrepreneurs.; Fortune Small Business to its “Power 30” list (2000); and The Hill newspaper to its “most influential small business” list (2006) describing her as  “the hardest working woman in show business.” In 1995, National Journal named Ms. Kerrigan to its short list of “K Street” activists most likely to have an impact on Capitol Hill. Campaigns and Elections Magazine named her as one of its “Rising Stars in Politics” in its April 1996 issue.

Kerrigan graduated from SUNY Cortland with a B.A. in Political Science, and resides in Northern Virginia

How the Power of Economic Opportunity for Women Transforms Society

Democracy That Delivers Podcast #57: Karen Kerrigan on Why it is Important to Support Entrepreneurship Worldwide