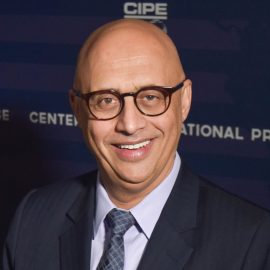 Abdulwahab Alkebsi is the Managing Director for Programs at the Center for International Private Enterprise (CIPE), a non-profit affiliate of the U.S. Chamber of Commerce and one of the four core institutes of the National Endowment for Democracy (NED). Alkebsi oversees almost 200 programs in more than 80 countries and supervises staff and representatives in more than two dozen countries as CIPE expands. They include Egypt, Iraq, Jordan, Tunisia, Nigeria, Ethiopia, Ukraine, Slovakia, Philippines, Cambodia, Colombia, and Guatemala and at CIPE’s head office in Washington, DC.

Prior to joining CIPE, Alkebsi served as the Director of the Middle East and North Africa division at the NED, and prior to that, Alkebsi served as Executive Director at the Center for the Study of Islam and Democracy (CSID), a non-profit think tank, based in Washington, DC, dedicated to studying Islamic and democratic political thought and merging them into a modern Islamic democratic discourse.

The State of the Private Sector in China

Free Enterprise & Democracy Network: Reflections on the Summit for Democracy