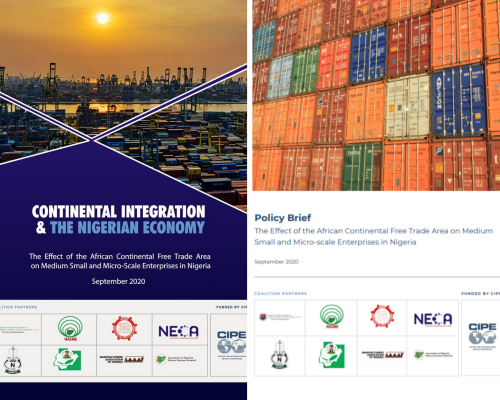 CIPE published a report on the launching of the operational phase of the African Continental Free Trade Area (AfCFTA) Agreement, and the effect this agreement has on Medium, Small, and Micro-scale Enterprises (MSMEs) in Nigeria.

Read the news coverage by The Guardian Nigeria here (quoted below).

“According to a UNCTAD report last year, though Rules of Origin are ruled that determine the country of origin of goods, and are essential to the free circulation of goods in preferential trade areas, it is one of the aspects of trade that people don’t really talk about. Besides, UNCTAD said total elimination of tariffs under the AfCFTA could increase the Gross Domestic Product (GDP) of every African country by three per cent, adding that appropriately designed RoO could significantly boost intra-African trade. The Center for International Private Enterprise (CIPE) in its report on the effect of the African Continental Free Trade Area on Medium Small and Micro-scale Enterprises in Nigeria, noted that two-thirds of the 1,800 MSMEs surveyed declared not knowing of the deal’s existence. According to CIPE, this lack of knowledge is particularly acute among smaller businesses and can represent an enormous obstacle to the successful uptake of AfCFTA.  The report showed that the knowledge deficit is compounded by the reported under-utilization of previously-entered into FTAs as a result of their complicated compliance requirements.”

Other news mentions include: Vanguard Nigeria; The Nation.

Continental Integration & the Nigerian Economy: The Effect of the African Continental Free Trade Area on Medium Small and Micro-scale Enterprises in Nigeria

A Users’ Manual on Registering and Operating CSOs, BMOs, and Business Start-Ups in Ethiopia