From the Transcript of December 12, 2018, Senate Armed Services Subcommittee on Emerging Threats and Capabilities Hearing on “Implications of China’s Presence and Investment in Africa,” below is a portion of questioning by Senator Gary Peters (D-MI) in which he references CIPE and CIPE’s “corrosive capital” report released at CIPE’s September 20, 2018 event held on Capitol Hill.

Thank you, Madam Chair. Thank you to our witnesses here today. I have recently read a report–its the Center for International Private Enterprise, which talks about how we need to protect democracies, particularly in Africa, from a flood of what they call corrosive capital that corrodes these emerging and developing democracies, primarily because of lack of transparency.

The one issue in particular I’d like to have each of you comment on is that there is–they talk abut a widely held belief that Chinese loans come with no strings attached, and that gives them an advantage in order to put these loans out relative to loans from either the U.S. or from international organizations, which put strings such as human rights, anti-corruption, issues that we, of course, care very deeply about here in the United States–but that it’s false that Chinese have no strings because they look for things to be sole sourced with Chinese firms.

They want a dominate equity share in projects. You have to have the mass importation of Chinese workers into these countries. I mean, the list goes on. Could each of you talk a little bit about this corrosive capitalism as referred to by this organization, whether or not you believe that is something we should be concerned about. And, more importantly, how do we deal with it–start with you, Mr. Meservey.

Thank you for the question, senator. Yeah, I’ve read the report. I thought it was excellent. I agree with its findings, and I referenced in my written testimony and my oral testimony the corruption–the routine corruption–that African companies engage in that wins them all sorts of favors and makes it very hard for others to compete.

There was an interesting survey done that found anywhere from 60 to 87 percent of Chinese companies admit to paying bribes to obtain licenses and things of that nature. U.S. companies will find–or leaders will find themselves in jail if they did something similar.

So, I think that the way to combat this–it’s obviously extraordinarily difficult, because you have to focus on civil society, I would say, because oftentimes African governments themselves are incentivized to engage in this behavior. They are–one of the scourges of the continent is that–is corruption.

And so, they are frequently far too willing to engage in this corrupt game. So, the biggest victims of corruption are the African people themselves. They are the ones left holding the bag. So, focusing on civil society, increasing their technical capacity, journalists–investigative journalists–there are some very brave people on the continent writing brave things and exposing all sorts of misdeeds. So, I think you have to really focus in on civil society.

“Yeah, thank you, Senator. I agree that the idea of no strings is a false concept. Not only is there strings in terms of the economic investments, but increasingly there’s strings regarding the politics. The former Assistant Secretary of State for Africa, Linda Thomas-Greenfield, publicly said that for the first time the Chinese weren’t even saying that we don’t interfere in countries’ internal affairs anymore.

And I think some of the instability in South Sudan and in Zimbabwe have laid bare that when China has their economic interests at risk, they are going to do and engage in ways to protect those interests.

There has been a number of recent exposes and convictions of Chinese corruption. In fact, most recently in our courts, a Chinese businessman was convicted for bribing the Ugandan and Chadian governments’ foreign investment. And we know from data such as aid data, a research lab out the College of William and Mary, that investment–Chinese investment–in

Africa disproportionately affects the leader’s home region or community.
I think the answer, as my colleague said, is civil society. I also think it is urging Africans to ask for better deals. It is possible. Andrew Alli, the former head of the African Finance Corporation, recently talked about how you can get better labor practices, more transparency, but an African government has to ask for it. Thank you.

In terms of the participation in corruption in Africa, I would say that China did not create this problem, so this problem was already there before China went to Africa, but China’s willingness to participate in those practices certainly has exacerbated the problem.

As for the reaction, of course civil society free media investigative journalism. I also propose that there should be more understanding and more studies of specific Chinese projects, especially the mega infrastructure projects in Africa, how they were reached, how they were negotiated, and how the results are being received by the local community.
I’ll stop there. Thank you.”

See the full exchange at: https://www.armed-services.senate.gov/hearings/18-12-12-implications-of-chinas-presence-and-investment-in-africa 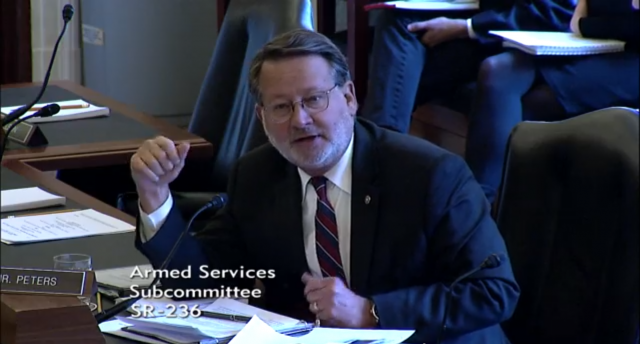 Corrosive Capital’s Threat to Democracy: How China and Russia Undermine Rule of Law Through Foreign Investment and Development Strategies

CIPE Report on “Corrosive Capital” cited in The Hill 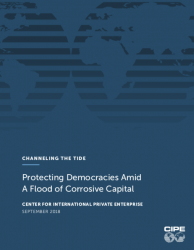