How can Indo-Pacific countries that need foreign investment guard themselves against corrosive capital that threatens to corrupt markets and weaken governance, while also building a better environment for constructive capital that generates greater opportunity? This is the focus of a new event series by CIPE and partners across Asia and the Pacific region. The second event in this series, on October 28, is a virtual panel discussion co-hosted by the Center for International Private Enterprise (CIPE) and Future Forum of Cambodia.

Chinese investment in Cambodia has increased in recent years, including through the Belt and Road Initiative. New case studies by Future Forum and its regional BRI Monitor partners highlight the unique challenges associated with this funding, including by comparing a Chinese-funded road project with a Japanese-funded road project. This allows Future Forum to highlight risks that are specific to Chinese funding and risks that require broader progress on governance gaps. Panelists will also discuss the importance of transparency to protecting vulnerable populations and the environment. 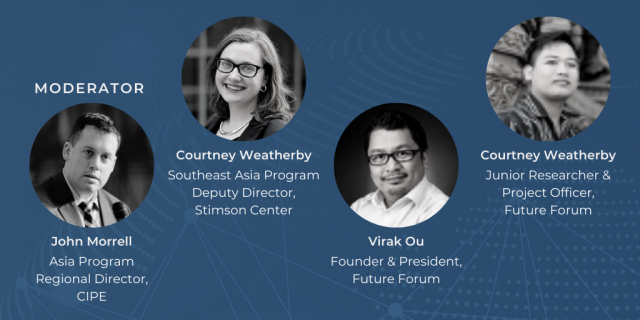 Chen Heang is a junior research fellow and Project coordinator at Future Forum, the Phnom Penh-based Public Policy Think Tank. In 2020, he joined Future Forum’s research program as a young researcher. During his time at Future Forum, he also contributed opinion articles to both local and regional news outlets. Chen Heang earned a Bachelor’s degree in International Relations from the University of Cambodia.He researches Chinese Infrastructure Projects in Cambodia and Cambodia’s Position in China’s Sea Power Projection.

Courtney Weatherby is a Deputy Director of the Stimson Center’s Southeast Asia Program and a Research Analyst with the Energy, Water, & Sustainability program. Her research focuses on sustainable infrastructure and energy development challenges in Southeast Asia and the Indo-Pacific. She has led a series of technical studies examining the nexus of issues in food, water, and energy in the Greater Mekong Subregion, with particular focus on Thailand’s electricity trade with neighbors and the 3S River Basin in Cambodia, Laos, and Vietnam. She also provides support to the development and management of the Mekong Dam Monitor, a platform for near-real time monitoring of dams and environmental impacts in the Mekong Basin, and the Mekong Infrastructure Tracker, a platform to track, monitor, and quantify the development of energy, transportation, and water infrastructure in South East Asia. She holds a M.A. in Asian Studies from the School of Foreign Service at Georgetown University and a B.A. in East Asian Studies with honors from Dickinson College.

John Morrell is the Regional Director for Asia and the Pacific at the Center for International Private Enterprise (CIPE). In this role, he leads a worldwide team of accomplished professionals, and is responsible for strategically guiding program development and ensuring effective implementation of a portfolio of programs on anti-corruption, corporate compliance, women’s economic empowerment, public and private sector governance reform, and creating political space in closed countries. He personally designed and implemented numerous initiatives that build the political, civil, and market institutions necessary for private sector led economies and democratic societies across Asia and the Pacific.

This event is the second of five in a series of bi-weekly discussions on findings from the BRI Monitor, a regional project that seeks to identify governance gaps associated with Chinese-funded projects and advocate for greater transparency and good governance. Each meeting will highlight findings from one of the BRI Monitor partners as part of a discussion on transparency and governance with experts on the focus country or project type. The BRI Monitor is a project by five partners from Southeast Asia and the Pacific: IDEAS (Malaysia), Stratbase ADRi (the Philippines), Institute for National Affairs (Papua New Guinea), Future Forum (Cambodia), and Sandhi Governance Institute (Myanmar). The BRI Monitor includes case studies and a transparency heatmap that assesses the transparency of BRI projects along 38 project data points that should be proactively released by host countries.

Catch up on the Previous Events: