Pakistan was recently ranked 151 out of 153 on the global gender parity index, according to a World Economic Forum report. To help combat this issue, CIPE and its partners have worked towards women empowerment through policy reforms since 2006. In a country that has been performing poorly on the Gender Gap Report, the challenges to advocate for gender-focused policy reforms are unprecedented.

CIPE’s efforts have helped navigate some difficult realities faced in the country. The first efforts focused on a major legislative reform that legally allowed the formation of four women chambers in provincial capitals of Pakistan. This slowly inspired women from smaller cities to advocate for more women’s chambers. As a result of these efforts, there are now twelve women chambers in Pakistan.

In countries where equal rights for all citizens are not respected, and democratic institutions are weakened, the chamber is rarely strong enough to advocate for policy reforms. Nevertheless, their joint presence is felt at all levels of policy corridors and the recommendations they provide have been acknowledged in building an inclusive reform process. In a male-dominated society, enabling a marginalized group to advocate for gender-focused economic reforms was not an easy task. However, by working strategically with our partners with a long-term goal, the opportunities for further interventions slowly unfolded.

The next level of CIPE’s work begun in 2017, when under CIPE-Pakistan stewardship, our long-standing partner Masooma Sibtain was elected as Vice President at the Federation of Pakistan Chambers of Commerce & Industry. Under CIPE’s technical assistance, Sibtain led an extensive campaign to bring together women chambers across Pakistan and other relevant stakeholders to create Pakistan’s first Women National Business Agenda (WNBA).

The WNBA became the foundational document for gender-focused advocacy in Pakistan between 2017-2019.
The program took a new leap when CIPE created opportunities for women chamber representatives to dialogue directly with parliamentarians. The series of these dialogues was carefully initiated to build the capacity of parliamentarians, including pro-reform women parliamentarians. It helped them understand the policy reforms needed to create an enabling regulatory environment for women-owned businesses to prosper.

This phase built the momentum to highlight the importance of women’s economic empowerment and contributions to the economy. It also highlighted the harmonization of policies and interdepartmental synergies, the revision of the Small and Medium Enterprises’ (SMEs) definition, and making the next Strategic Trade Policy Framework (STPF) a gender-inclusive one in an aim to close Pakistan’s gender gap. All of this was done with the goal to improve the future of Pakistan’s economic stability.

Public-private dialogues organized by CIPE and its partners provided an opportunity for parliamentarians to deepen their understanding of the economic role of women, what issues and challenges they face regarding economic participation, and policy bottlenecks that impede growth.
Dialogues also underlined the fact that existing policy frameworks, such as the Strategic Trade Policy Framework (STPF) or the Small and Medium Enterprises’ Policy, were not inclusive with respect to a gender perspective.

The highlight of this initiative is the inclusion of gender-focused policy components in the Strategic Trade Policy Framework, something never considered by the Ministry of Commerce in previous Trade Policy Frameworks. Draft STPF document has focused on inclusive growth and gender mainstreaming. Ministry also commented that the draft has a separate chapter on special policy measures to support and facilitate women entrepreneurs for entry into the international exports arena. 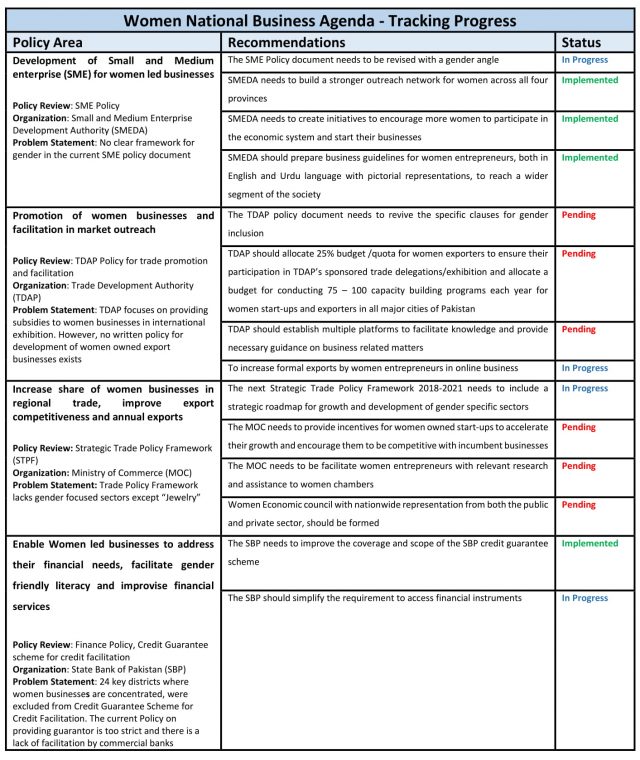 Out of 14 key recommendations, four have been implemented, four are progressing and six are pending, seems like a slow, yet significant achievement over the last three years of well-directed advocacy strategy by CIPE and its partners.

Democracy That Delivers #214: Impacts of COVID-19 on Supply Chains in the APAC Region