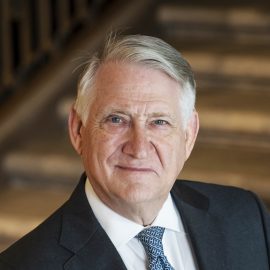 Greg Lebedev maintains a professional portfolio that spans business, government, education and philanthropy. He is Chairman of the Congressionally-funded Center for International Private Enterprise (CIPE), one of the four core institutes of the National Endowment for Democracy. CIPE’s mission is to promote democratic governance and free-market institutions throughout the world. Lebedev sits on a number of other Boards, including the United States Chamber of Commerce, the largest business federation in the world, where he is a member of the Board’s Leadership Council; Marymount University, a private Catholic institution offering undergraduate and graduate degrees to nearly four thousand men and women from 78 countries; and the International Foundation for Electoral Systems (IFES) which works to strengthen democracies throughout the world.

He is also Chairman of the Advisory Board of the Robertson Foundation for Government, a private family fund that supports the education of talented men and women wishing to pursue governmental careers in national security and international affairs. He is a member of the Editorial Advisory Board of Diplomatic Courier, a global affairs media network; and regularly advises on business strategy and international affairs involving trade, development, and global corporate governance. In 2008, he was nominated by President George W. Bush to be US Representative to the United Nations for Management and Reform (with the rank of Ambassador).

Before these assignments, Lebedev served as President and CEO of the American Chemistry Council (ACC), where he represented the domestic and international interests of the nearly $2 trillion global chemical and plastics industry. Prior to ACC, Lebedev held a unique portfolio at the US Chamber of Commerce. During his nearly five years of service, he was the Chamber’s first-ever COO and also Executive Vice President for International Policy and National Security Affairs. In addition to running day-to-day operations, he was Managing Director of the Chamber’s public policy think tank, the National Chamber Foundation, and President of the Chamber’s Center for Corporate Citizenship, a governance and philanthropic resource of the business community.

Earlier, Lebedev was a Senior Partner of The Hay Group, then one of the largest international management consulting firms, after which he joined the American Trucking Associations where he was Senior Vice President, CFO and Acting CEO. Following the first Gulf War, as an independent consultant, he directed projects associated with the reconstruction of Kuwait; and was nominated by President George H.W. Bush to be Inspector General of the Department of Defense.

Lebedev has also held a number of senior governmental assignments. President Gerald Ford appointed him to the State Department post of Assistant Inspector General of Foreign Assistance/Deputy Assistant Secretary of State. Before that, he served in the Bureau for Security and Consular Affairs and was one of Secretary of State Henry Kissinger’s youngest Deputy Assistant Secretaries. Prior to his State Department tour, he served in The White House as Deputy Special Assistant to the President of the United States.

Lebedev earned a Juris Doctor degree from the School of Law of the University of South Dakota and holds a Bachelor of Arts degree from the same university. He is admitted to practice law in the District of Columbia, and lives in Virginia with his wife and daughter.

Democracy that Delivers #311: Emerging Women Leaders in the Middle East and North Africa