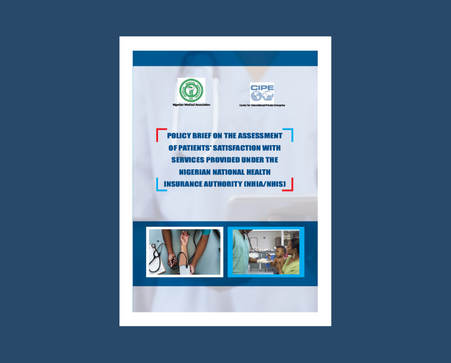 On August 9, the Nigerian Medical Association (NMA), in collaboration with CIPE held a hybrid Public-Private Dialogue (PPD) in Abuja to present the findings of the survey on patient satisfaction and challenges with services provided under the Nigerian National Health Insurance Authority (NHIA). The hybrid event with over 100 participants, including key stakeholders such as top government officials and leaders of several national professional health associations, featured a presentation of key survey findings with policy reform recommendations, a plenary session, and the unveiling of the final survey report by the Minister of State for Health who remarked that government will adopt the recommendations of the report. According to the Minister of State, the health ministry cannot operate alone and collaborations like NMA – CIPE are required in building synergy for strengthening the Nigerian healthcare system. The Director General of NHIA in his response expressed happiness with the report and requested assistance and collaboration from NMA towards improving the agency’s services. In his opening remarks, the immediate past President of the NMA, who led the research team, stated that the purpose of the research was to fill the gaps in patient satisfaction and achieve the goal of universal health coverage in Nigeria. The CIPE Nigeria Country Director in her remarks emphasized the need for the stakeholders to use the report as a tool for engagement to actualize crucial reform. Following the PPD, NMA will seek further engagement with the respective government Ministries, Departments, and Agencies to ensure sustained implementation of key recommendations.

Empowering Persons with Disabilities throughout Nigeria: A Conversation with David Anyaele

Democracy that Delivers #356: Senegal’s Historic Push for Beneficial Ownership in Extractives and Beyond, with Cheikhou Oumar