The Sahel region in West Africa is home to complex security and economic challenges. In the countries of the G5 Sahel (Burkina Faso, Mali, Mauritania, Niger, and Chad), regional military and government initiatives are under increasing pressure to find solutions to rising insecurity, conflict, and internal displacement fueled by attacks from extremist groups linked to al-Qaeda and the Islamic State as well as the dramatic impacts of climate change. Despite international cooperation at the G5 Sahel level, the regional situation continues to worsen, with reports of conflict and displacement spreading further south and a spike in cases of community conflict. In 2019 alone, the number of newly, internally displaced people rose to over 1 million – a threefold increase from the previous year. COVID-19 has exacerbated these challenges, leading to lost livelihoods and reduced access to basic services, while threatening to constrain economic growth for years to come.

While international attention on the Sahel overwhelmingly focuses on security, supporting local economies is crucial to encourage sustainable economic growth, private investment and the development of locally-led solutions to address regional insecurity. Faced with the mounting threat of conflict, as well as lockdowns and border closures due to COVID-19, SMEs are extremely vulnerable to the current multidimensional crisis in the Sahel region. CIPE has worked in the countries of the G5 Sahel for the past three years to better understand the relationship between private sector development and insecurity and is working with the Sahel Business Coalition to inform regional economic and security policy.

Please join us for a conversation with experts from across the Sahel for a panel discussion about the evolution of insecurity in the G5 Sahel, the impact on economic development, and opportunities for the private sector to support economic resilience across the region. The panel will be conducted in English. 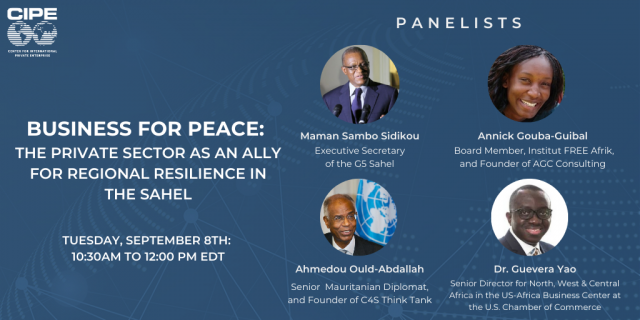 Maman Sambo Sidikou is the Executive Secretary of the G5 Sahel. He was appointed by the G5 Sahel heads of State at their summit in Niamey, Niger on 6 February 2018. Prior to his current appointment, Ambassador Sidikou served as the United Nations Secretary-General’s Special Representative for the Democratic Republic of the Congo (DRC) and Head of the United Nations Organization Stabilization Mission in the Democratic Republic of the Congo (MONUSCO) from October 2015 until 31 January 2018.

Ahmedou Ould-Abdallah is a Senior Mauritanian Diplomat who served as Minister of Foreign Affairs and Cooperation, as well Mauritania’s Ambassador in various countries as well as representative at European Union and the United Nations. He became the Special Envoy of the UN Secretary General for Somalia, West Africa and later Burundi before retiring. He continued to be active writing on political governance and supporting various UN and AU initiatives across the continent; he founded the regional think-tank C4S and is on the Board of Advisors for the International Peace and Security Institute.

Annick Gouba-Guibal has a multidisciplinary background in modern literature, history and international risk management. She is the founder of the AGC consulting firm, where she specializes in public policy analysis and evaluation and in project management. She has taken the gamble of placing her action at the heart of interactions between stakeholders (governments, international institutions, NGOs, private sector) at multiple decision-making levels, to feed a prospective on thinking about development issues in Europe and Africa. She also chairs the Board of Directors for the FREE Afrik Institute in Burkina Faso.

Dr. Guevera Yao is senior director for West and Central Africa in the U.S.-Africa Business Center at the U.S. Chamber of Commerce. Yao oversees programs and policy initiatives to broaden commercial relationships between the U.S. and markets in North, West and Central Africa. He works closely with Chamber member companies and government leaders to deepen and expand commercial relationships. Yao is an economist and policy expert with over 20 years of experience in the areas of economic integration, regional infrastructure development, and trade and finance for a number of developing countries, including Member States of the Economic Community of West African States (ECOWAS).

Hanna Wetters is a Program Officer, Africa at the Center for International Private Enterprise.