Corrosive capital can take many forms, but the outcome is always the same. The erosion of democratic foundations and the predatory exploitation of regulatory and governance gaps in the public and private sectors of the recipient country. The implications could define the fate of a region. It is of absolute importance to distinguish if financing, whether state or private, is corrosive or constructive.

China’s economic and political influence in Latin America is steadily increasing. To discuss this, the premier organizations working with the private sector and local governments in Latin America and the Caribbean, CIPE and AS/COA, are pleased to invite you to attend an event focusing on the impact of Chinese corrosive capital on host communities.

Panelists will discuss how the money flows may usher so-called “Chinese sharp power” into the region, affect democratic governance in recipient countries, and the potential consequences for private sector competition. 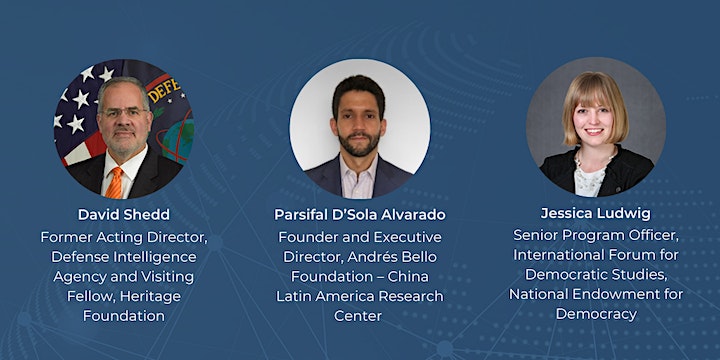 Examining how this capital relates to Chinese sharp power in the region will be Jessica Ludwig. She is a Senior Program Officer at the International Forum for Democratic Studies at the National Endowment for Democracy. She coordinates comparative research and analytical initiatives related to authoritarian sharp power projection. She is also Coordinating Editor of the Forum’s Power 3.0 blog and producer of the Power 3.0 podcast, exploring how resurgent authoritarian regimes leverage the features of globalization to exert influence beyond their borders, and how democracies contend with these challenges.

Analyzing the negative effects of corrosive capital on democracy, governance, and sovereignty in Latin America with a focus on Venezuela and China through a Regional perspective is Founder and Executive Director of the Andrés Bello Foundation – China Latin America Research Center Parsifal D’Sola Alvarado. D’Sola is a Foreign policy analyst specialized in Sino-Latin American relations with a primary focus on Venezuela.

Discussing Financial markets and Chinese investments will be David Shedd, Former Acting Director at the Defense Intelligence Agency and visiting fellow at the Heritage Foundation. Having worked in the U.S. government for nearly 33 years in posts throughout Latin America and Caribbean, Mr. Shedd served in various intelligence policy positions examining a multitude of issues in the region. He will provide a national intelligence and financial perspective on issues pertaining to Chinese financial practices and strategy.