“Why [are there] no female entrepreneurs in this event?” That’s the question Swinga, a famous male content creator, entrepreneur, and influencer posed on Instagram during the Africa Venture Network event in August, Disrupting the African Market, in Casablanca, Morocco. Instantly, Swinga’s post set off a heated debate on social media. The conference, which was organized to gather investors and entrepreneurs to explore new markets in Africa, was composed overwhelmingly of men.

It wasn’t just the question that triggered passionate back-and-forth, but also the answers that came back from other men. Respondents from a variety of professions — ranging from entrepreneurs and content creators to doctors and professors — provided answers such as, “Women are not ready to take risks,” “Women are the ones who give birth to the successful male entrepreneurs we see today,” “Women are better at taking care of their households,” and other similar responses.

For just a moment, the invisible became visible. Businesswomen across Morocco will often tell you that, while there is certainly work to be done to improve laws, socio-cultural attitudes pose some of the biggest barriers to women’s entrepreneurship. Within the family or at school, entrepreneurship is not a professional option that girls and women are commonly encouraged to pursue. Role models for female entrepreneurs are also hard to find. There are businesswomen in Morocco, but they’re not featured much in media beyond a select and elite group.

And it’s true: without inspiration or encouragement, many qualified women may shy away from entrepreneurship. This is not because of any biology-based risk aversion, however, but because they may not imagine it is possible or will mistakenly assume that it is not suitable for them. Indeed, these women often mention lack of confidence as a major impediment.

Family and social expectations also play a role: business is not always seen as a “woman’s job” or a good professional option for daughters. In Morocco, there is also a common expectation that women who marry will leave the job market to focus on their families — particularly if there are children or elderly parents in the equation.

Women responding to Swinga’s statement at the Casablanca conference, including many female entrepreneur Instagram influencers such as stoun it, Asmae Hajji and Let’s Hijou it, highlighted many of these challenges. Expressing frustration and anger at women’s absence from both the conference and from the economy, they particularly cited:

The consequences of these barriers are very clear. In fact, women’s workforce participation in Morocco has been dropping: a recent USAID report shows that there are 15 percent fewer women in the workforce now than in 2010. Meanwhile, female entrepreneurs – women in charge of their own companies – only make up 16% of all Moroccan entrepreneurs according to a March 2022 report by Morocco’s Observatory of Small and Medium-Size Enterprises (OMTPME). This proportion is far lower than both world-wide and Sub-Saharan averages.

What’s also clear is that only through collective action will Moroccan women (and their male supporters) be able to begin turning these numbers around. Fortunately, such efforts are already underway. CIPE is helping several businesswomen’s associations better serve female small businesses owners in their communities. Using a collective action approach called a “business agenda,” CIPE is also helping the associations develop reform roadmaps that they will use to advocate for the changes needed for entrepreneurship to become a real option for more women in Morocco – one that is both encouraged and accessible.

Some screenshots from the stories of female entrepreneurs who responded to the question that started the debate: 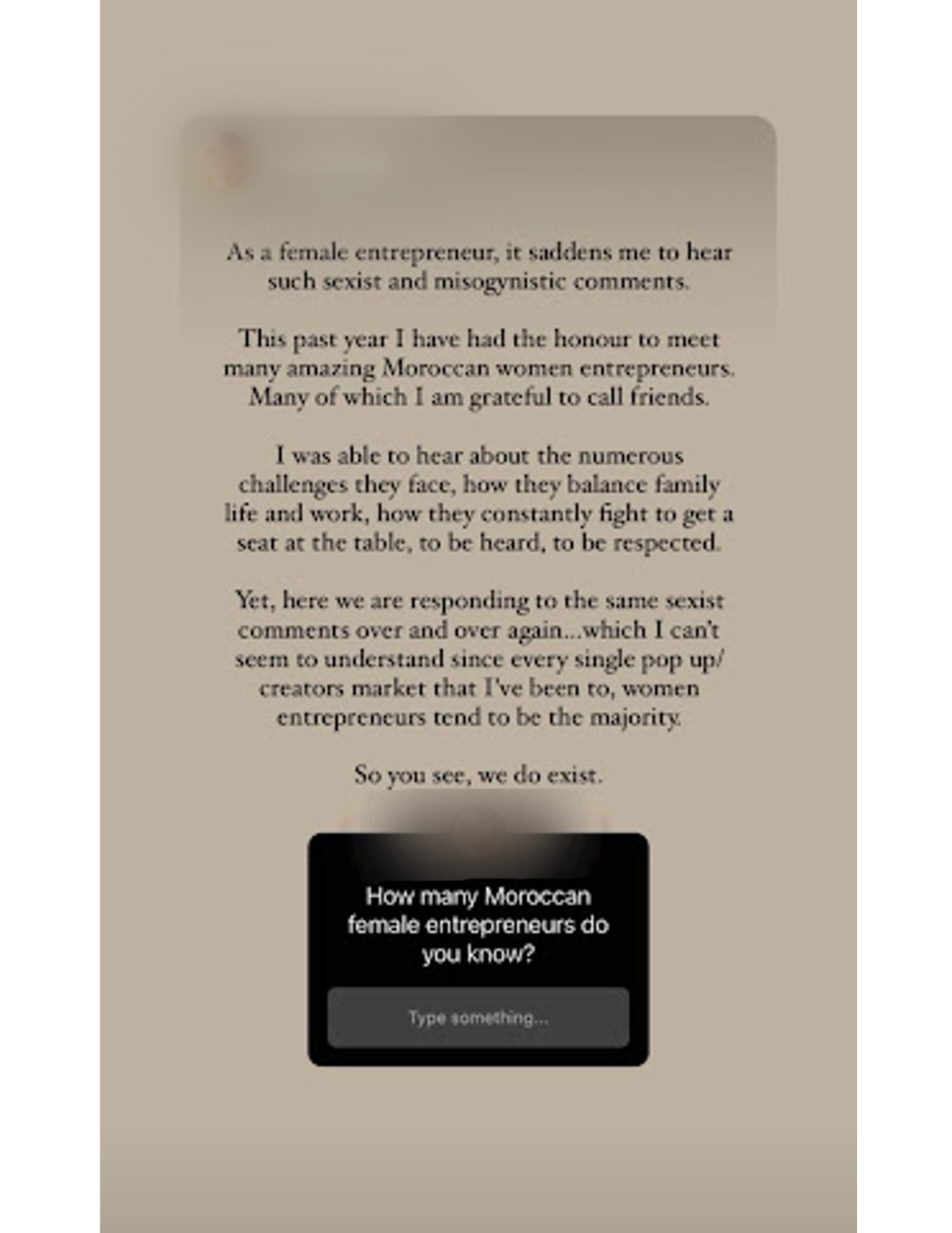 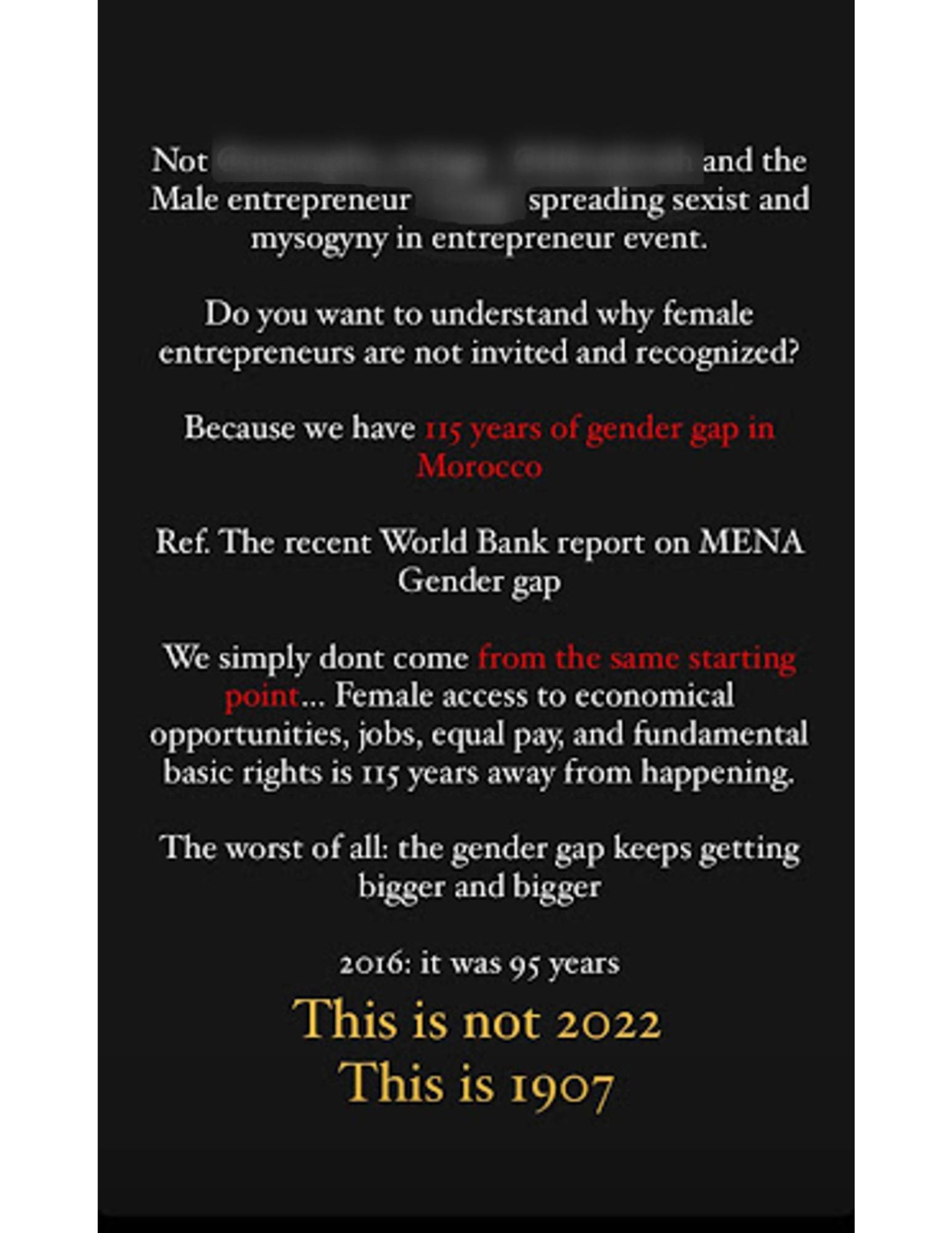 From Social Compact to Legal Responsibility: Protecting the Rights of Women in Turkey’s Corporate Culture

New Calls for Change Amid Protests Over Iran Death