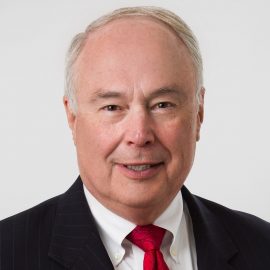 William Reinsch is the Scholl Chair and Senior Advisor at the Center for Strategic International Studies (CSIS) and a Senior Advisor at Kelley Drye & Warren LLP. Reinsch served as President of the National Foreign Trade Council from April 2001 to May 2016. The NFTC, founded in 1914, is the oldest and largest business association dedicated solely to trade policy, export finance, and international tax. The organization represents 200 companies through its offices in New York and Washington, D.C. As president, Reinsch led NFTC’s efforts in favor of open markets, in support of Eximbank and OPIC, against unilateral sanctions and in support of sound international tax policy, among many other international trade and tax issues of concern to U.S. business. From 2001 to 2016, Reinsch concurrently served as a member of the U.S.-China Economic and Security Review Commission. He is also an adjunct assistant professor at the University of Maryland School of Public Policy, teaching a course in trade, policy, and politics.

Prior to joining the NFTC, Reinsch served as the Under Secretary for Export Administration in the U.S. Department of Commerce. In that position, he administered and enforced the export control policies and anti-boycott laws of the U.S. government and monitored the condition of the nation’s defense industrial base. Prior to taking this position, Reinsch spent 20 years on Capitol Hill from 1973 to 1993, most of them as senior Legislative Assistant to the late Senator John Heinz and subsequently to Senator John D. Rockefeller IV.