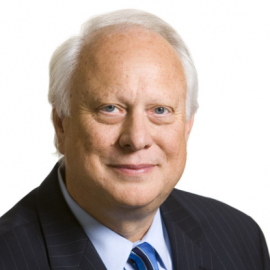 With more than 30 years as The Heritage Foundation’s executive vice president and COO, Truluck was responsible for not only developing and maintaining the think tank’s physical presence on Capitol Hill, but its intellectual presence as well.

In 1977, Truluck, a long-time associate of Heritage President Ed Feulner at the Republican Study Committee, became Heritage’s Director of Research. He built a new kind of research department – one that did not previously exist in Washington – for Heritage. Under Truluck’s guidance, Hertiage became the first to take complicated public-policy questions and translate them into concise, credible research papers that would be quickly read by policymakers in Congress and the executive branch. Truluck also oversaw Heritage’s move into new Capitol Hill headquarters in the 1980s and their expansion into an annex building in 2001. In 2007, Truluck took on another major project: A complete renovation of the building’s façade at 214 Massachusetts Ave N.E. – complete new windows, a new entrance vestibule, and a new balcony outside Heritage’s Davis Policy Center.

Truluck became a member of the Heritage Board of Trustees in 2001. Before joining Heritage in 1977, Truluck served on the staffs of Senator Strom Thurmond and Representative Ben Blackburn, and served as deputy director of the Republican Study Committee. He is a founding director and current member of the board of directors of CIPE. During 1982 and 1983, he served on the executive committee of the President’s Private Sector Survey on Cost Control, also known as the Grace Commission. He also served on the White House Fellows Selection Committee in the Reagan administration.

President Reagan also appointed him to the Administrative Conference of the United States in 1987. Truluck is also a board member of the Capitol Hill Business Improvement District, a non-profit organization dedicated to enhancing the Capitol Hill neighborhood for tourists and natives alike. In addition, he is a member of the Philadelphia Society, which promotes a free and ordered society by broadening the understanding of America’s basic principles and traditions, and a member of the Mont Pelerin Society, an international group of free-market intellectuals.