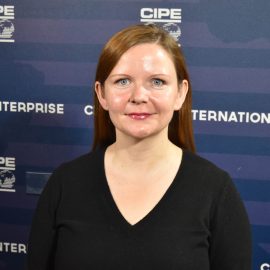 Martina Hrvolova is a Program Officer for Europe and Eurasia at the Center for International Private Enterprise (CIPE) since 2016. She concentrates on responses to global strategic threats, economic misconceptions, responsible economic policies, corrosive capital, enterprise ecosystems, authoritarian capital, and private sector leadership in advancing democracy and markets in Central & Eastern Europe as well as in the Balkans. Previously, Hrvolova served as a human rights expert for the Slovak Foreign Service from 2005 to 2015, and during that time she was posted to the Slovak Missions to NATO and EU in Brussels, Belgium, primarily advising on public affairs, NATO Partnerships, EU Enlargement and Western Balkans.

Prior to that, she served as the Executive Secretary of the Slovak Chairmanship of the Council of Europe. She has earned her LLM in International and Comparative Law from the George Washington University Law School in Washington, DC, and her Ph.D. in European Civil Law from the Comenius University in Bratislava, Slovakia. Hrvolova also previously spent time volunteering through OSCE election observation missions in Eastern Europe and the Balkans. She speaks Slovak, English, Czech, French, and Russian. She is also a Certified Compliance & Ethics Professional with the Society of Corporate Compliance and Ethics.

Democracy For Sale? Chinese Investment in the Western Balkans

Responsible Economic Policy-Making in Bosnia and Herzegovina and Serbia