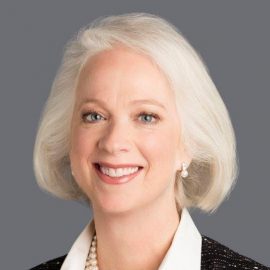 Martha Boudreau is AARP’s Chief Communications and Marketing Officer.  As a member of the Executive Team, she is responsible for setting enterprise brand and communications strategies and unifying AARP’s voice throughout the organization’s extensive channels: social, digital, video, earned and paid media, and AARP’s leading publications, AARP The Magazine and the AARP Bulletin.

Prior to joining AARP, Boudreau was President of the Mid-Atlantic and Latin America Regions for FleishmanHillard, a leading international communications consulting firm. During her tenure, she served on the company’s global management committee and was a key figure in growing the firm’s presence in the Middle East as well as its expansion into Latin America.  Martha was central to the coordination of client work and new business efforts worldwide, as well as managing financial and client services for the Washington office.  She represented FleishmanHillard at the World Economic Forum’s annual meeting in Davos, Switzerland, played an active role in the Global Gender Parity program and participated in numerous other WEF regional events.

Martha is a member of the International Women’s Forum and The Seminar.  She is an Executive Fellow in the Baldrige Performance Excellence Program and serves on the Board of Directors for Ford’s Theater and The American Bird Conservancy.

A native of Detroit, she is a graduate of the University of Michigan and lives in Annapolis, MD.

Democracy that Delivers #60: Martha Boudreau on the Importance of Messaging and Branding in the Non-Profit World