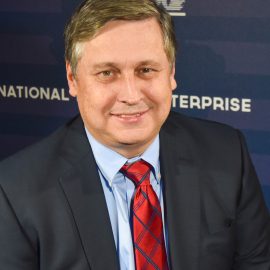 Ken Jaques is the Communications Director for the Center for International Private Enterprise. Before coming to CIPE, Jaques founded Global Communications Strategies (GCS) in 1997.

Before starting GCS, Jaques was a reporter in CNN’s political unit and served as Press Secretary to New Jersey Senator Frank Lautenberg. He was also a writer and senior researcher at Congressional Quarterly magazine and served as contributing author for “Jigsaw Politics: Shaping the House After the 1990 Census” and Congressional Quarterly’s “Politics in America,” 1988 and 1990 editions.

Jaques holds an MA in Public Policy from Georgetown University and a B.A. in Political Science from Webster University in St. Louis.

Democracy that Delivers #303: Emerging Leaders in Policy and Program Learning

Democracy that Delivers #299: Summit for Democracy – Advancing Respect for Human Rights in the Digital Era, with Paola Galvez