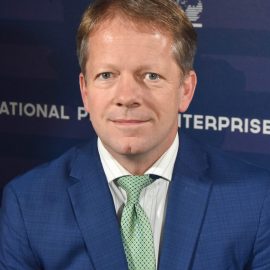 Gregg Willhauck is the Director for Congressional & Government Relations at the Center for International Private Enterprise (CIPE). Willhauck is CIPE’s principal liaison to the U.S. Congress, U.S. Department of State, and U.S. Agency for International Development. He also works regularly with international development organizations such as the United Nations Development Programme, the Organisation for Economic Co-operation (OECD) and Development and Development, and the World Bank. In addition to communicating CIPE’s activities and interests before these entities, Willhauck participates in a variety of development NGO coalitions focused on issues such as improving U.S. foreign assistance effectiveness, reforming U.S. aid structures and instruments, and coordinating strategies among the development non-governmental organization community. From 2008 to 2016, Willhauck also served as CIPE’s Afghanistan program officer, managing CIPE’s office operations and programs in that country and providing broader strategic and policy guidance for CIPE’s work in South Asia.

Willhauck joined CIPE in May 2005 after working 19 years in the U.S. Senate. His last Senate position was as Legislative Director to U.S. Senator John E. Sununu from 2003-2004, during which time Gregg was the principal staff person handling Senator Sununu’s work on the Senate Foreign Relations Committee. From 2001-2002, Willhauck served as executive director of the Senate Steering Committee, a caucus of U.S. Senators that meets regularly to discuss issues of common interest and to develop strategies for accomplishing their legislative objectives. Prior to that, Willhauck served as legislative counsel to U.S. Senator Spencer Abraham handling the senator’s assignments to the Committee on Labor and Human Resources (1995-1996) and the Committee on Commerce, Science and Transportation (1996-2000). From 1997-2000, Willhauck also served as the majority staff counsel for the Commerce Committee’s Subcommittee on Manufacturing and Competitiveness, which Senator Abraham chaired, and was responsible for assembling and managing its hearings.