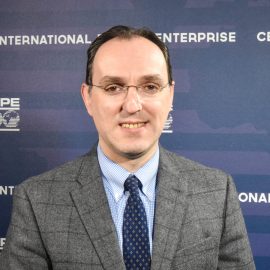 In his role at CIPE, Florent oversees projects in Latin America and Africa that fund modernization of global supply chains and cross border trade flow, and supports the implementation of the World Trade Organization’s Trade Facilitation Agreement (TFA).

In Colombia, his projects support a new risk management system for the national sanitary and phytosanitary agency; and establishing the Center for Trade Facilitation and Good Practices for advance rulings in the automotive sector. In Malawi and Zambia, Florent has developed and is implementing projects for intervention in support of modernizing a framework, licensing and increasing professional knowledge for the clearing agents industry in both countries.

Prior to joining CIPE, Florent worked with the World Bank in Washington D.C. covering Trade Facilitation Projects in Africa. Before that, he served as the Chief of Staff to the Minister of Trade and Industry of Kosovo. During that time Florent served in the negotiating team for free trade agreements between Kosovo and the European Union, chaired trade negotiations between Kosovo and Turkey, worked on business regulatory environment and doing business reform, industry competitiveness, and contributed to a number of initiatives promoting free trade and private sector development between Kosovo and the wider Balkans. Bakija also worked for DFID where he covered projects in governance and strategic planning.

An Example from Colombia Highlights the Importance of Trade Facilitation