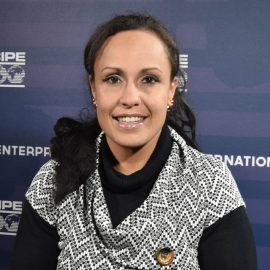 Eli Webb is the Country Director for the Center for International Private Enterprise (CIPE)’s Program in Papua New Guinea. Webb joined CIPE in November 2015 to assist in rolling out a series of projects in Papua New Guinea (PNG), as part of CIPE’s effort towards building a stronger entrepreneurial foundation for the local community, namely through the Women’s Business Resource Centre.

Webb is also currently a local PNG media personality in the music industry, as a judge on a local reality music show, and in 2014 successfully co-founded a small NGO out of another local province, providing funding, counseling, and emergency accommodation for trauma patients of family and sexual violence. Previous to CIPE, Webb has held a myriad of roles, including work with the Human Services department of the Australian Federal Government and a long stint in the Australian Insurance industry.

In her spare time Webb is a PNG national representative in squash, recently competing in the 2015 Pacific Games and 2014 Glasgow Commonwealth Games. Webb actively sits on the PNG National Squash Federation as President and holds a seat on the National Athletes Commission.