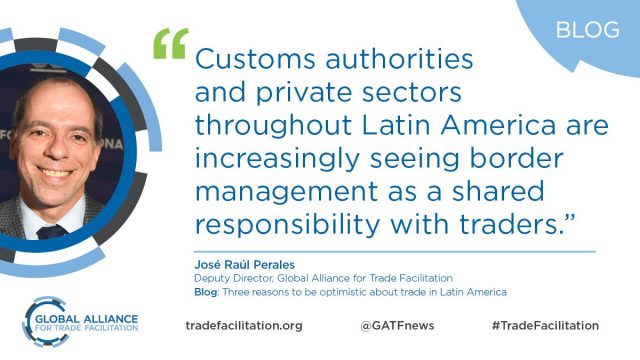 José Raúl Perales, Deputy Director at the Global Alliance for Trade Facilitation explains the trends he sees in the region’s trade facilitation landscape.

While speaking at a recent hemispheric business summit in Washington DC, a group of executives from several Latin American countries asked me if I held hope for trade in Latin America. Their skepticism seemed warranted. The question came as a tense standoff between the United States and China, Latin America’s main trading partners, rattled global markets and supply chains. Uncertainty over the terms of Brexit and delays over USMCA ratification shook business confidence in the region. Even though some large countries achieved modest export gains amid global trade tensions, they will struggle to sustain them with relatively weak connection to global supply chains.

In spite of these challenges, I said I was optimistic about Latin American trade. After several years supporting customs and trade facilitation reforms in the region, I can cite three recent, discernible trends as reasons for my optimism.

1.     Closer collaboration between authorities and business

Customs authorities and private sectors throughout Latin America are increasingly seeing border management as a shared responsibility with traders. Thanks to exponential growth in the application of digital technologies, customs officials are placing more and more importance on managing and sharing data, not to mention the quality of such data. Increasingly this means engaging the private sector’s own resources, skills, and trove of data generated throughout their supply chains. In the process, border authorities are coming to see the private sector as a partner and not just a regulated entity, while customs officials in places like Colombia and Brazil are beginning to adopt the language of service provision in their approach to traders. The importance of this culture shift cannot be understated. It indicates growing trust between public and private sectors, an essential condition for the success of important border management initiatives like AEO programs. It is also a pillar of efficient commercial environments, without which activities like e-commerce cannot thrive.

2.     The end of the security vs. efficiency trade off

The second trend is another culture shift in the making. For a long time, many Latin American customs officials worked under structures and procedures built on the assumption of a trade-off between security and efficiency, particularly in countries like Colombia and Honduras that have long grappled with illicit trade and contraband. In this view of the border, efficiency in the import of goods was regarded by customs as a security risk, since faster clearance and release times meant officials would not have been able to conduct proper physical inspections of suspicious cargo. The widespread (and expanding) adoption of risk management technologies has broken this false zero sum game, not just at customs, but increasingly across many government agencies (like Peru’s SENASA, or Brazil’s INMETRO) with some role or jurisdiction over international trade activities.

The consequences of this development are multiple. It has enabled customs administrations to devote more resources to internal reforms geared to improving administration, human resource management, and revenue collection.  It has also begun changing how these officials see their own role, not just as fiscal or national security agents, but also as key players in their countries’ competitiveness. Given Latin America’s lagging role in global supply chains, the evolution in these attitudes could make the region a more attractive destination for manufacturing, and thus have interesting implications for Latin America’s global economic integration.

3.     Breaking down barriers between border agencies

Indeed, perhaps the most interesting development, and continuing challenge for Latin American trade, is the increasing realization that border management is a process, undergirded by close coordination among government agencies. Businesses have long complained about the lack of coordination among Latin America’s border agencies. Customs clearance and cargo release have been customarily treated as a collection of independent transactions, often involving conflictive or opaque procedures, not to mention costly delays. The consequences for trade and economic growth have been notable, even in countries where bilateral trade is subject to the rules of free trade agreements. For example, in Central America, after a decade of reform attempts, customs now operate on a 24-hour schedule, a move many reformers hoped would help the region capitalize on its geographic proximity to the United States to attract manufacturing investment. Yet traders are still unable to maximize the benefits of this arrangement, because all other agencies with border presence operate on 8-hour schedules, often without correspondence or personnel overlap with each other.

And yet this landscape is evolving, as we speak. Advances in single window design and implementation throughout Latin America are bringing agencies together. The national trade facilitation committees launched as part of the Trade Facilitation Agreement of the WTO have spurned a broader interagency coordination agenda. In places like Brazil, Colombia, Dominican Republic, Chile and others, the private sector has been a strong advocate, and has often taken a leading role, in partnering with government agencies to implement successful border coordination and reform processes.

As we enter a new decade I find all of this reason to be optimistic that beneath the headlines of global trade tensions, steady progress is being made in facilitating trade across the region – progress that can unlock the real benefits of trade for all.

This blog was also published on the Global Alliance for Trade Facilitation website.

Democracy that Delivers #283: COVID and Corruption In Latin America – Transparency Opportunities in Argentina

Democracy that Delivers #281: COVID and Corruption in Latin America – Corruption Behind a Pro-Carbonization Policy in Mexico

COVID-19 and Corruption in Latin America: The Pandemic’s Impact on Corruption Risks in Mexico, Brazil, and Argentina