This piece was first posted on the WAGE blog:

Over the past year, the Center for International Private Enterprise (CIPE) and the American Bar Association Rule of Law Initiative (ABA ROLI) have conducted research and analysis focused on identifying the multifaceted social, political, economic, and legal issues Moldovan women face. The resulting Gender and Inclusion Analysis for Moldova, launched this week, is the first public research released under the Women and Girls Empowered (WAGE) initiative in Moldova “Reducing Barriers to Women’s Economic Empowerment in Moldova.”

Funded by the U.S. Department of State Secretary’s Office of Global Women’s Issues, WAGE is a global consortium to advance the status of women and girls, led by ABA ROLI in close partnership with CIPE, the Grameen Foundation, and Search for Common Ground. The WAGE Moldova initiative is a multi-disciplinary program aimed at building and supporting an alliance of women’s organizations to improve the enabling environment for Moldovan women engaged in economic activity. The initiative works to strengthen the organizational capacities of women’s business associations (WBAs) and women’s civil society organizations (WCSOs) to represent and provide services to Moldovan women and to foster collective action to address legal and societal barriers to women’s participation in the economy.

The Gender and Inclusion Analysis findings are being used to inform project activities, including providing targeted capacity building and one-on-one coaching on gender equality issues to local organizations. Some of the key findings across select sections covered within the analysis are noted below:

Moldova has a positive history of gender equality being written into its legislation and has ratified many international and regional agreements relevant to promoting gender equality. Some respondents even expressed a sense of good faith that gender biases were rare or did not occur at all within the Moldovan justice system. However, many laws focused on gender equality lack the resources for proper implementation, while gender inequality biases permeate other laws. For example, women have a different retirement age than men and typically have disproportionately lower pension benefits. Additionally, self-employed women are not entitled to maternity benefits, and women who are pregnant and breastfeeding or those who have recently delivered are prohibited from certain types of employment.

Patriarchal norms and stereotypes are deeply entrenched in Moldovan society, especially around family roles and responsibilities. The Gender and Inclusion Analysis identified that both Moldovan men and women strongly believe and observe the stereotype that women should prioritize getting married, become homemakers, and focus predominately on childrearing. A CSO respondent noted that “We just recently started to talk of impact on men of gender stereotypes…with men from [the] police, [the] army…it’s the most rigid area for law enforcement structures. So, men confessed, for example, during the trainings which I conducted, that they would like to take part in education or to stay with kids, to be fully involved in family life. At the same time, they fear being ridiculed by their friends. There are specific names for men who are helping in this way, such as “under the shoes of women.” These are bad nicknames for a man, you know. It is like touching his masculinity.” WAGE also identified a lack of systemic educational programs in the Moldovan school curriculum that focus on gender equality principles, further perpetuating the inequity in future generations.

In the political sphere, typically older men are perceived to be the most electable candidates due to the belief that women and young candidates are riskier, less reliable choices. Respondents also shared that when women run for political office, they appear to be scrutinized differently from their male counterparts. A woman entrepreneur noted, “When a woman is in the political spotlight the public starts commenting on her hairstyle, the way she is dressed, whether she has a family or not. I mean, women, I think, are much more harshly criticized and much more thoroughly analyzed than men.” Once they assume office, they are met with additional challenges in being taken seriously by their male colleagues and must consistently assert themselves within their political party.

Moldovan law contains provisions related to gender equality and family and labor. For example, the Labor Code prohibits family-related discrimination in the workplace (e.g., the dismissal of pregnant workers) and provides for 126 days of paid maternity leave, 14 days of fully paid paternity leave, and partially paid childcare leave for either parent. However, the lack of flexible work arrangements and the declining availability of affordable childcare exacerbate structural and social constraints on women’s economic participation. This, coupled with the social impacts of the homemaker stereotype, has resulted in some women being unable to effectively participate in the workforce or pursue entrepreneurship in the way they desire.  Moldovan women report that they perform almost twice as much unpaid care work as men – approximately 4.9 hours per day. Women’s economic activity is further negatively affected by sexual harassment in the workplace, which is not effectively addressed or sanctioned. This is mainly because related legislation is relatively new, and the definition of sexual harassment is narrow. From the traditional workforce to entrepreneurship to running for office, Moldovan women shared how they were not expected to have a successful trajectory in their planned pursuits due to various gender-related social or economic barriers.

The Gender and Inclusion Analysis did not find any legal barriers which impacted Moldovan women’s ability to marry, divorce, own property, start a business, or control financial resources. However, in practice, some respondents reported that married women do not have direct access to their household funds and require the approval of their spouse to make any financial decisions. Typically, women entrepreneurs noted they had to rely on family contributions or their spouse to begin their businesses – especially if they had been unable to work for some time due to caregiving responsibilities. Women entrepreneurs also noted challenges in accessing bank loans and other forms of credit to expand their businesses, citing banks’ hesitancy to fund women-owned enterprises. This has resulted in many women entrepreneurs operating in either unregistered informal or registered small businesses. In addition, when divorcing and dividing assets, some women reported that questionable legal tactics are sometimes used that leave women without a fair share of marital assets upon divorce, while others reported difficulties in affording legal representation for the proceedings. Situations like this can cause divorced women to experience financial insecurity. 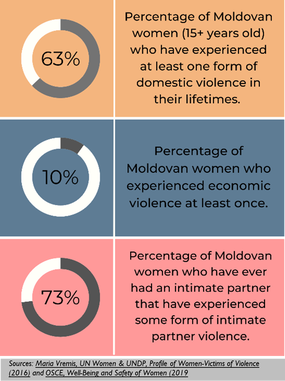 While estimates vary, 63 percent of Moldovan women over the age of 15 have experienced at least one form of domestic violence (physical, psychological, or sexual) in their lifetimes. The COVID-19 pandemic further escalated these issues. A respondent shared that domestic violence hotline calls increased by 40% during the early lockdown period. GBV related legislation was also found to be lacking. The Contravention Code reduces the criminal liability of perpetrators of domestic violence and restricts women’s access to criminal justice. This results in women’s reluctance to participate in police investigations due to fear of social stigma, widespread victim-blaming attitudes, and a lack of trust in a judicial system perceived as heavily biased against victims. The government and civil society organizations are undertaking significant work to improve laws and increase educational awareness to eradicate GBV and provide emotional support and legal resources to impacted women and their families.

LGBTI women, ethnic minorities (e.g., Gagauz and Roma), women living in rural areas, women in the Transnistria region, and women with disabilities are particularly vulnerable groups in Moldova, who face increased discrimination and challenges. For example, acute GBV is experienced by Roma women, women in rural areas, and women with disabilities. However, women from the most vulnerable groups, especially those from the Roma community, are reluctant to report GBV and to rely on state mechanisms for redress. Further compounding this issue, our analysis found women in the Transnistria region are disproportionately affected by human trafficking.