In 2016, the Colombian government signed a peace agreement with the Revolutionary Armed Forces of Colombia (FARC in Spanish), which included rural poverty and development as main topics. As a result, the Development Program with a Territorial Approach (PDET in Spanish), was created to stabilize and transform the territories most affected by violence, poverty, illicit economies, and institutional weakness, and prioritize development in the 170 identified municipalities.

The Observatory for Private Investment in Zones Most Affected by Poverty and Violence is an initiative started four years ago when CIPE saw an opportunity to utilize its expertise at the intersection of the private sector and democracy advocacy to further the 2016 Peace Accords. The Observatory, developed and maintained by CIPE and local partner Jaime Arteaga & Associates (JA&A), seeks to enhance responsible private sector engagement in PDET areas.

To ensure the Observatory findings directly impact businesses in PDET areas, CIPE identified a natural ally in the chambers of commerce given their physical presence in PDET regions, their reputation, and direct links with the local private sector. 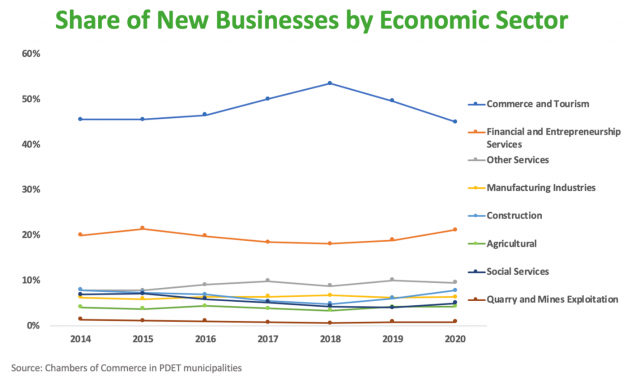 The produced portfolios were targeted to address the biggest challenges for each chamber and increase their capacity to meet the needs of local private sector actors, carry out commercial dispute-resolution processes, strengthen local businesses, and promote formalization. Portfolio creation was informed by roundtable dialogues with the chambers and private sector stakeholders, as well as by previous Observatory team activities, such as the Guide on Responsible Investment in Post-conflict Zones: A Perspective for Boards of Directors, which was created in a previous version of the project to promote responsible investments that include local stakeholders.

In order to capitalize on the growing interest of private companies in PDET regions, the Observatory team recently published a guide, How to Involve Businesses in PDET Regions in collaboration with USAID & ACDI/VOCA Program of Alliances or Reconciliation (PAR), Colombia’s Reconciliation Corporation, and USAID. The guide is the product of a series of roundtables with more than 60 representatives of the public, private and international sectors. Roundtable participants analyzed 5 prioritized private sector involvement mechanisms and their level of regulation, including special tax regimes and private social investment. Through the analysis of such mechanisms, participants also identified best practices and bottlenecks that companies face to participate in the implementation of the PDET. The resulting guide also gives an overview of the role that key actors, such as universities and chambers of commerce, have in the process of engaging the private sector.

To improve the private sector ecosystem in PDET regions, in 2022 the Observatory project will continue monitoring private investment, promoting public-private dialogues, creating new regional alliances, developing the capacities of chambers of commerce, and promoting the relevance of private investment in post-conflict regions through the 2022 electoral campaigns.