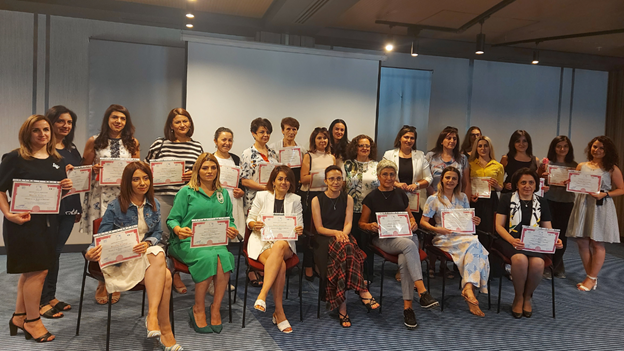 One of the most pressing and unresolved challenges associated with Armenia’s investment climate is the country’s low level of corporate governance observed within local companies and enterprises. A project supported by CIPE’s Center for Women’s Economic Empowerment and implemented by the Corporate Governance Center (CGC) in Armenia sought to enhance women’s roles in Armenia’s corporate leadership and create solutions to increase the country’s foreign investment appeal.

The project, “Armenia: Women on the Board of Directors,” aimed to promote the representation of women members on the Boards of Directors of Armenian companies and women’s overall involvement in economic decision-making processes. So far, it has featured an unprecedented training program for aspiring female directors. It also included an expert survey conducted to determine perceptions of women’s representation on boards of directors.

Women on the Board of Directors Training Program

A total of 31 women participated in the training program to help them be successful when serving on boards of directors. Participants were presented with essential information concerning corporate governance, leadership, business finance, accounting, and networking. Each training session combined best international practices adapted to the Armenian context with the practices and perspectives of local mentors and trainers. Twenty-nine participants passed the training program’s final exam, confirming their proficiency in key areas of corporate governance and compliance. The program received widespread praise from participants. CIPE plans to launch a second phase of the training program in Fall 2021. 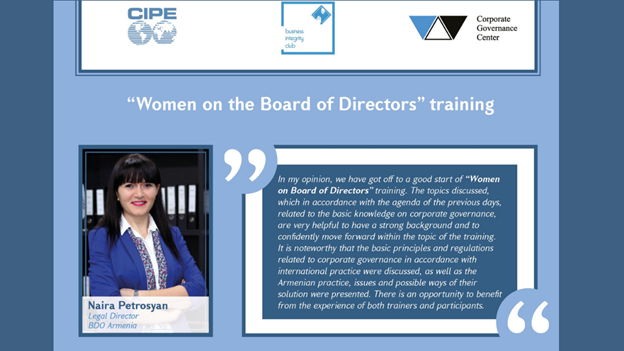 In total, 52 experts, 28 women and 24 men, took part in a survey presented by CGC Director Narine Melikyan. The overwhelming majority of respondents, 96 percent, said that women provide added value in creating and maintaining companies’ corporate governance systems. Additionally, two-thirds of respondents noted that the work of boards of directors improves as more women join, backing the findings of many related international studies. When boards create a balance of female and male representation, they develop a culture of discussion and dissent, which curbs groupthink and promotes corporate efficiency.

While challenges and stereotypes remain, 98 percent of respondents say that female representation on boards of directors should be encouraged and promoted.

Two additional key survey findings signaled areas of improvement to be considered by Armenian boards of directors. The first need is to address the so-called “underestimation of potential” phenomenon: often when choosing a female leader, only those with enough deemed relevant experience are considered, whereas, in the case of selecting a male leader, their envisioned potential is the deciding factor. Additionally, 75 percent of respondents say that the controlling shareholder is the decisive player when forming boards of directors. Fifty-four percent of women respondents considered this a barrier when it comes to men making decisions about women’s qualifications.

While challenges and stereotypes remain, 98 percent of respondents say that female representation on boards of directors should be encouraged and promoted. Proposed ways to achieve this included requiring the presence of women through soft and legislative quotas, enacting government incentives, and introducing relevant programs and support mechanisms. You can learn more about the survey findings via the CGC’s Business Integrity Club webpage, found here.