Across Asia, the process of obtaining government information through transparent mechanisms is a challenge. Many countries in the region still lack national laws defining the Right to Information (RTI), a crucial component for developing and maintaining public trust in government.

Since the ability of a government to provide accountable and clear access to all sources of information builds legitimacy for democratic governance, RTI has become a focus area for the Center for International Private Enterprise (CIPE) in Asia. In Sri Lanka, the Maldives, and the Philippines, CIPE programs are addressing shortcomings in access to government information by promoting the implementation of RTI acts, improving the framework of RTI processes, and advocating for RTI legislation.

Sri Lanka, a democratic republic in South Asia, passed its first Right to Information (RTI) Act in 2016. This act not only allows citizens to participate more effectively in decision-making and exercise more active citizenship, it also enables citizens to make requests for any information held by public institutions and requires proactive disclosure of the information by those institutions.

The passage of the RTI Act in Sri Lanka was the collective achievement of decades of work performed by numerous, diverse individuals and organizations. Since its beginning in 2016, CIPE and its Colombo-based partner Verité Research have promoted the use of the rights provided by the Act.

Given the limited knowledge about the legislation among the Sri Lankan public, CIPE and Verité initiated projects to introduce small- and medium-enterprises (SMEs) to the Act and build a demand for its full implementation. To this end, one project set up RTI Business Solutions Clinics in the Eastern, Northern, Southern, and Central provinces. These clinics trained regional businesses on the main aspects of the RTI Act, how RTI can be used as a tool for business development and planning, and how businesses can prepare more effective strategies using information from public institutions.

CIPE’s partnerships with Verité Research, Transparency Maldives, and the Makati Business Club have enabled citizens, especially entrepreneurs, to exercise their right to information, become more aware of RTI processes where laws exist, and advocate for their adoption where laws are absent.

CIPE and its partner utilize RTI requests to drive other projects in Sri Lanka, such as budget tracking and procurement monitoring. By documenting and producing case studies on Sri Lankan procurement practices, our work investigates irregularities, illegalities, and governance gaps in foreign-funded public works projects in Sri Lanka. Similarly, RTI requests and proactive disclosure provide information on the government’s federal budget implementation through the flagship CIPE-Verité partnership at Budgetpromises.org. The site monitors and evaluates the government’s performance on federal budget implementation, using RTI to hold the government accountable by providing easily understood metrics on the gap between policy promises made and delivering on those policy promises.

As an independent third party amid Sri Lanka’s fractious politics, Verité’s government monitoring has contributed to enhanced public demand for government accountability in public finance. Even more importantly, the work has generated positive behavioral change from government agencies. For instance, the willingness of authorities to share information in response to RTI requests increased from 48% at the end of 2017 to 70% by the end of 2018, while the timeliness of the responses also improved from 35% to 44% during the same period. Government institutions have also improved their proactive disclosure of information. In 2017, about 76% of the budget proposals needed RTI requests to assess progress because online information was inadequate; by 2018, the need for filing RTI requests dropped to 40% as more information was available online. Through CIPE and Verité’s continuous efforts, Sri Lankan citizens increasingly discuss and demand their right to information, strengthening public accountability and promoting democratic governance in Sri Lanka.

Improving RTI Implementation in the Maldives

In the Maldives, entrepreneurs and SMEs in many industries struggle to compete with oligopolistic firms. This small South Asian nation, located on over 187 islands spread across more than 500 miles of ocean, is faced with systemic and regulatory barriers that impede competition. These include high inter-island transportation and communication costs. To address information challenges, the country’s first RTI legal framework was established in 2013. However, democratic backsliding and a deep-rooted culture of bureaucratic secrecy hindered the implementation of the law. To address these challenges, CIPE partnered with Transparency Maldives (TM) to improve the country’s RTI regulatory framework and the capacity of its main actors.

In partnership with CIPE, TM is improving capacity of the Maldivian Information Commissioner’s Office (ICOM), monitoring the public RTI hearings conducted by ICOM, and providing RTI training workshops for SMEs. Through consultations with ICOM staff, training workshops provide practical exercises for RTI processes such as proactive disclosure and adjudicating exemption requests. TM has attended all virtual ICOM hearings since the process restarted in July 2020, compiling recommendations from observations of hearings for the Auditor General’s Office, the Maldives Police Service, the Ministry of Finance, and many others. CIPE and TM have also conducted a survey among Maldivian SMEs to assess their level of awareness and usage of RTI processes. To address the lack of easily accessible RTI guidance and awareness of RTI processes, the project is producing an RTI Manual for SMEs and conducting training sessions for entrepreneurs and small businesses in partnership with the SME and Entrepreneurs Federation of Maldives.

The Business Case for RTI in the Philippines

In the Philippines, the private sector lacks consistent access to information because there is not a comprehensive law which mandates government compliance to information requests. The only legal framework that exists for the public to access information is a 2016 executive order. It allows the executive department to disclose government records, contracts, and transactions. However, this order is limited in scope to the executive branch of the central government and relies on the personal support of President Duterte, whose policies frequently alarm civil society groups.

To address the lack of RTI legislation in the Philippines, CIPE has partnered with Makati Business Club (MBC) to advocate for a national RTI law. MBC is the private sector lead of the Right to Know Right Now (R2KRN) coalition, which has been advocating for RTI legislation in the Philippines since 2009.  Through this partnership, CIPE and MBC are developing a public communications strategy and stakeholder mapping to build demand for change across civil society and congressional policymakers, convening Freedom of Information (FOI) workshops, facilitating regional forums on FOI,  and organizing a Right to Information Summit. 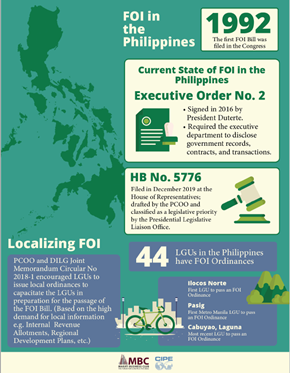 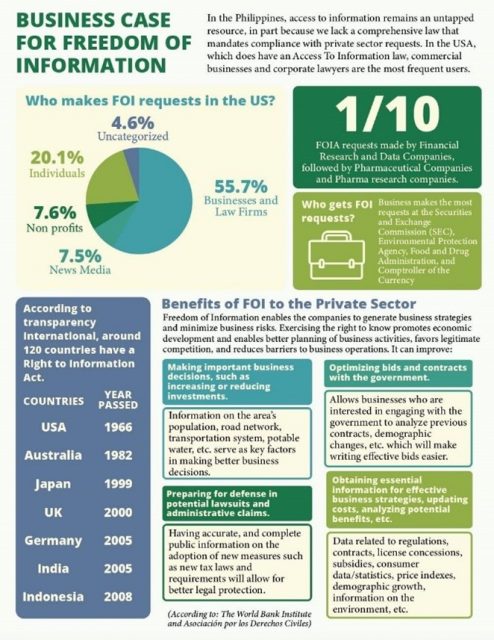 In October of last year, this newest CIPE partnership started to identify the key stakeholders to engage on RTI, including business organizations at the regional and national levels, civil society organizations, academia, and members of the House and Senate. MBC staff convened meetings on November 5 and 6, 2020 with the Presidential Communications Operations Office (PCOO) to discuss how PCOO Assistant Secretary Kris Ablan can push for passage of the FOI bill in Congress.

They also met with the R2KRN Coalition leaders to discuss challenges facing FOI advocacy in the Philippines. Many of these stakeholders, including Mr. Ablan and Senator Risa Hontiveros, convened at MBC’s first roundtable discussion on December 4, 2020 to discuss the ongoing implementation of the FOI executive order and proposed FOI legislation. Currently, there are seven FOI bills pending in the Senate Committee on Public Information and Mass Media and eighteen bills filed in the House Committee of Public Information. In the coming months, MBC will analyze the pending Senate and House bills to determine which versions will best benefit the private sector. Additional FOI workshops, regional forums, and the RTI Summit will make the business case for robust RTI legislation in the Philippines. While the passage of a comprehensive law will require sustained advocacy, this project is jumpstarting the Philippines’ policy dialogue on RTI.

CIPE’s partnerships with Verité Research, Transparency Maldives, and the Makati Business Club have enabled citizens, especially entrepreneurs, to exercise their right to information, become more aware of RTI processes where laws exist, and advocate for their adoption where laws are absent. However, RTI is a new concept and its full realization has yet to be achieved.  By engaging with both the citizens requesting information and the government entities responsible for providing it, CIPE and its partners facilitate better RTI outcomes. As the public continues to pursue information requests, monitor governmental performance, and engage in public-private dialogue, the right to information will facilitate democratic governance in Asia.

The Impact of COVID-19 and PNG’s Reform Agenda

Democracy That Delivers #245: Myanmar Coup, Protests, and Life on the Ground with Khin Lay, Founder and Director of Triangle Women’s Support Group