We are on the verge of a new industrial revolution, where artificial intelligence (AI) has the potential to change everything: the way we produce, consume, trade, and work.

The experience of the previous industrial revolutions—the steam engine at the end of the eighteenth century, electricity in the nineteenth century, and information and communications technology during the second half of the twentieth century—indicates that countries where firms quickly adopt and disseminate emerging technologies obtain more opportunities for economic growth. Indeed, these episodes of accelerated technological change were phases of growth acceleration but also of great divergences in income, productivity, and welfare among countries. In this sense, the AI-based revolution poses an opportunity for growth for many developing countries, including Argentina. But is Argentina up to the challenge?

Measuring the Opportunity for Growth

To examine how the emergence of AI may drive the growth performance of Argentina,  the Center for the Implementation of Public Policies for Equity and Growth ran simulation exercises of alternative scenarios on the adoption and dissemination of AI and its impact on economic growth in Argentina for the next two decades. The methodology CIPPEC used was based on the setup of an augmented economic growth model in which alternative trajectories of AI adoption in Argentina are evaluated. We developed three alternative growth scenarios: a negative one (no AI adoption), a neutral one (AI adoption according to Argentina’s history in previous technological revolutions), and a positive one (widespread adoption of AI and a sizable innovation effect). 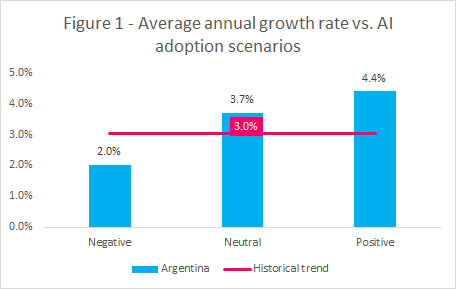 The results of the exercise are summarized in Figure 1, which shows the average annual growth rates of GDP for the next ten years according to the three possible scenarios/futures. The negative scenario (with no AI adoption) would imply a deceleration in the growth rate from the 3% annual rate observed as a historical trend since 1990 to 2% in the next decade. The neutral scenario would bring an average annual growth rate of 3.7%, which is slightly higher than the historical trend. Finally, the positive scenario would imply a very marked acceleration of the pace of economic growth in Argentina: GDP will grow at 4.3% per year through 2030.

Is Argentina ready to seize the growth opportunity?

AI’s growth potential in Argentina appears to be significant. But, as I will try to show, the status quo is not an option if Argentina wants to take advantage of this window of opportunity. Technological change is not automatic: it requires the timely availability of dynamic companies that can absorb knowledge and business practices, and a workforce that has the skills, abilities, and knowledge compatible and complementary to the emerging technologies.

The Future of Work

A large part of the tasks currently performed by workers will likely be performed in the future by machines and algorithms. Other workers, however, will be in high demand because they will complement AI and allow its expansion.

Although there is a high degree of uncertainty about the future of work, there are three qualities likely to be relevant: (1) perception and manipulation in complex contexts, 2) creativity, and (3) social intelligence. Occupations that are less dense in these qualities will require a larger effort in re-adapting workers’ skills to match the use of AI and related technologies.

What does this imply for the Argentine labor market? To answer this question, we follow the conventional literature and estimate the skill mismatch of workers in Argentina. This indicator offers a guideline for the effort required to retrain workers insofar as it indicates to what extent they possess qualities that complement new technologies. If Argentina were in the positive scenario highlighted above, the shortage of the labor force with AI complementary-skills could be an obstacle to seize the opportunity. How many Argentine workers have occupations requiring skills that are complementary with new technologies? Our estimate amounts to about 1.9 million out of a total of 11.9 million covered by household surveys. That is, about 18% of the total employed population (see figure 2). The remaining 82% would require, in a scenario of rapid adoption of technology, big investments in human capital to readapt their skills. The percentage of workers with the right skills is low in Argentina, compared to roughly one third with those skills in the United States.

Creating a brighter future of work in Argentina: A call to action

Argentina has an opportunity ahead to create better jobs. By breaking the historical trend and accelerating the rate of adoption of technologies associated with AI, GDP growth could accelerate by more than one percentage point per year over the next decade.

But a rapid and intense adoption of AI and other new technologies will not occur spontaneously, it will require concrete public policy actions. There are three indispensable courses of action:

Each of these three lines of action will be necessary to achieve a trajectory of rapid technological adoption and productivity growth. There are great challenges ahead, without a doubt, but the opportunities are, also without doubt, much greater. As Joe Strummer, the famed lead singer of The Clash once famously said, “the future is unwritten.”

Ramiro Albrieu is a Senior Researcher on economic development at the Center for the Implementation of Public Policies for Equity and Growth (CIPPEC) of Argentina.

Future of Work: Technological Change and Workers in Argentina

The Post-Pandemic Future of ESG: An Event Series — Event #3

Future of Work/COVID-19 and Corruption: Digital Technology and the Fight Against Corruption in Latin America