This is Part III of a three-part blog series. Read Part I and Part II. 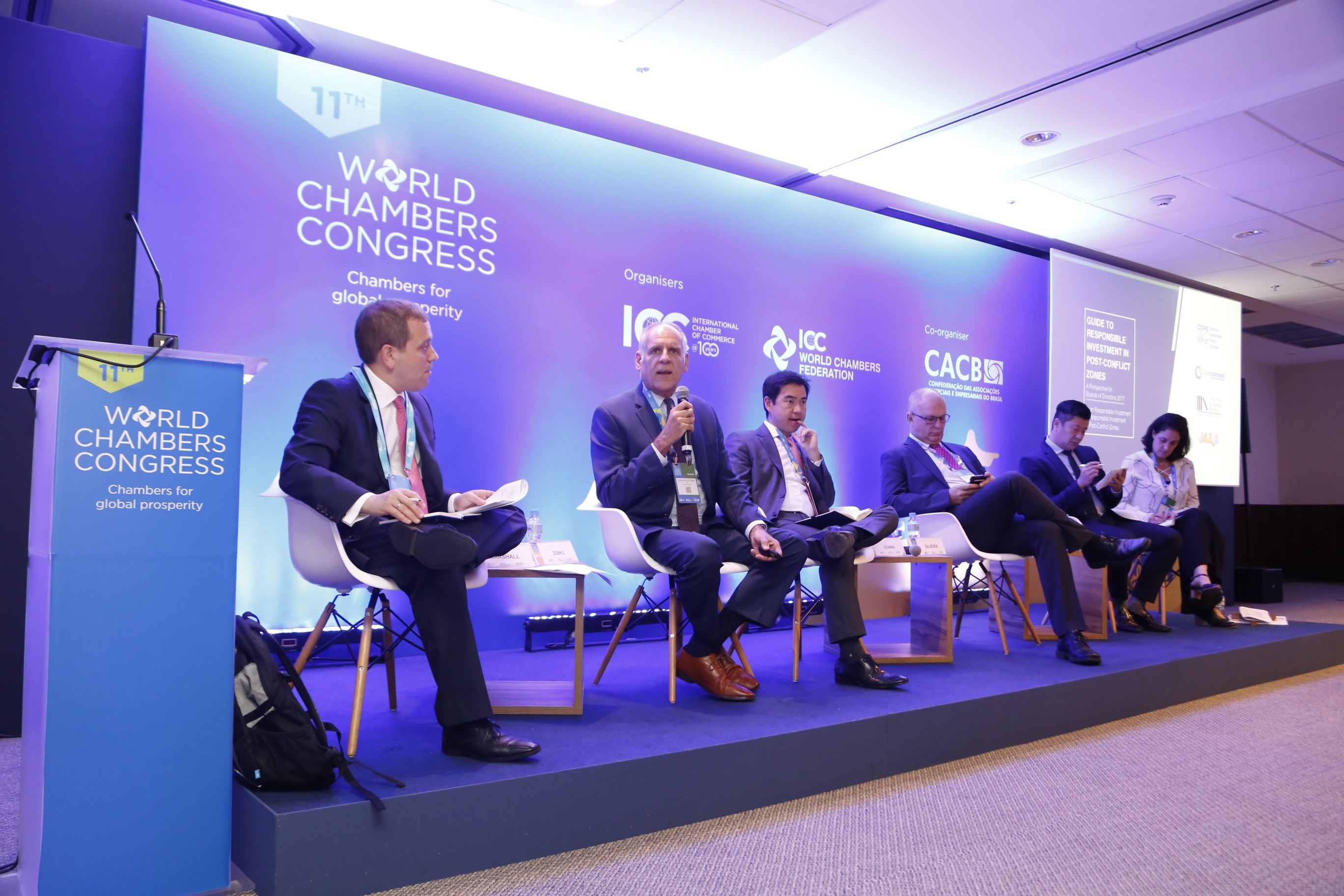 In addition to the themes of the 11th World Chambers Congress (WCC) in Rio de Janeiro that I discussed in my two earlier posts, there was also an interesting conversation about the need for building inclusive and vibrant emerging economies. One topic of focus was infrastructure. Adam Marshall, Director General of the British Chamber of Commerce and moderator of the panel, commented that since the 1960s two challenges have persisted: infrastructure and talent management. In Latin American countries in particular, the condition of infrastructure is a part of “country cost” that adds to the expense of doing business.

John Zemko, Regional Director for Latin America and the Caribbean at the Center for International Private Enterprise (CIPE), presented a case study on CIPE’s work Colombia in support of advancing the economic ramifications of the peace process. He showed a relationship between the coverage of the electric transmission network and the road network with, for example, the location of the coca plantations. One of the conclusions is that producers who do not have easy access to infrastructure will hardly be able to take their products to formal trading centers. He also talked about initiatives such as the taxes for public works program, in which large taxpayers can pay up to 50% of their income tax through public works in the areas of Colombia most affected by the armed conflict. That arrangement not only favors the infrastructure construction lacking in these places, but also gives the private sector the opportunity to strengthen their ties with the local communities.

Representatives of entities such as Banco Santander and the Development Bank of Brazil reiterated that the fundamental inputs for the development of the infrastructure are money, labor, and time. They also agreed that, except for time, the other two elements (money and labor) are in the hands of the private sector. What is more, it is the companies, in this case multi-Latinas (companies with presence in several Latin countries), that can propose regional interconnection of infrastructure projects as the space for cooperation rather than competition between neighboring countries. Such unhealthy competition was something that used to happen in Europe and that no longer occurs under the European Union. Latin America can replicate this lesson.

More opportunities for international cooperation were discussed on a panel organized by the Ibero-American Association of Chambers of Commerce (AICO). The economies of the countries that have member organizations of AICO are diverse in their composition and scale. However, many share a high dependence on natural resources, which is why the chambers must attempt to (and they committed themselves to doing so) add value to the commodities that are exploited in their jurisdictions. This  requires the focus on overcoming barriers to diversified growth such as poor infrastructure, lack of legal stability, and volatility of political risks. The chambers can help reduce these structural country costs. Another result of this meeting was the commitment, signed by the participating chambers, to work on the search for the completion of an internet domain extension that refers to Latin America as a region – perhaps finishing the links that lead to the subcontinent with “.lac.” Despite the regional diversity, this workshop also showed what unites many Latin American countries: although the official WCC languages were Portuguese and English, this discussion was held entirely in Spanish.

Regarding the capacity of adaptation to a global market, emerging markets in Latin America and beyond were identified as most in need of programs for competitiveness. These middle-income countries are in a somewhat precarious comfort zone because, at least in the case of countries such as Brazil or Colombia, exports of raw materials maintain relative economic stability, and as a result, they do not prioritize the development of other sectors to diversify their economies. What is more, many emerging markets are still overly dependent on international aid, which makes it less of a priority for governments of these countries to encourage the growth of the private sector. In this regard, the intervention of Kiprono Kittony, former National Chairman of the Kenya National Chamber of Commerce and Industry, was very interesting. He pointed out that “the African private sector believes in commercial relations more than in assistance – we believe in trade, not aid.”

Emerging markets are also experiencing how financial alternatives are changing the relationship between companies, especially SMEs, and the traditional banking system. Financial technology, or fintech, can ease transactions and lower the cost of accessing credit. A decade ago it was unthinkable that someone could request a loan from their cell phone from an entity that does not have an office and that does not consult with the traditional credit databases. Today this is the trend in the financial markets. Particularly in emerging economies, although banking penetration continues to grow, the population’s use of the financial system and the tools it offers remains minimal. Timothy Murphy of MasterCard Brazil emphasized that fintech and the traditional financial system should work together through alliances in order to democratize access to finance and use of financial tools for individuals and SMEs. At the same time, countries need to address the challenges posed by the growth of fintech for governments and regulators. There is an urgency to level the playing field between the fintech and the traditional banking sector, not only because of competition in the financial services industry, but also to avoid fraud and money laundering through new platforms. Chambers of commerce should have an important voice in these policy debates.

I would like to conclude this review on the World Chambers Congress by reflecting on the speech given by John Denton, ICC’s Secretary General. He pointed out that while the world has changed so much since 1919 when the ICC was created, our focus must always be on creating a shared value for a shared future – this year’s WCC theme. More than ever, today’s challenges demand a stronger private sector. This is only possible through a strong system of chambers of commerce with the ability to improve and be inclusive, modern, and equitable. Only then will these organizations be able to ensure that businesses build prosperity and flourish every day, for all people, all over the world.

Simón Mejía Ochoa is a Specialist in Projects for Development at Jaime Arteaga & Asociados based in Bogotá, Colombia

The Role of Associations and Chambers in Post-COVID19 Economic Recovery

COVID-19 and Corruption: The Rapid Responders

Democracy That Delivers #210: Launch of the Public Integrity Forecast with Alina Mungiu-Pippidi