Masooma Sibtain is a pioneer in Pakistan, an entrepreneur who is paving the way and inspiring other businesswomen to take on leadership roles in her country and throughout South Asia. In a particularly notable accomplishment, she was the first woman elected vice president of the Federation of Pakistan Chambers of Commerce and Industry (FPCCI) in 2016, less than a decade after the country made it legal for women to start or join chambers of commerce. FPCCI is comprised of over 200 business organizations. Recently, in early 2018, Sibtain was appointed Chair of FPCCI’s Standing Committee on Women’s Economic Reforms. In this position and in her role as FPCCI vice president, she spearheaded Pakistan’s first-ever Women’s National Business Agenda to lower barriers for women in business, leading an unprecedented effort for the country’s largest mainstream business organization.

But the road hasn’t been easy; it took determination for Sibtain to be able to advocate for fellow women entrepreneurs on a national level and beyond. Sibtain, who owns a fashion business that employs about 300 artisans, became involved with chambers in 2008, when she joined the South Punjab Women’s Chamber of Commerce and Industry (SPWCCI), now known as the Women Chamber of Commerce Multan Division. The SPWCCI was the very first women’s chamber established in Pakistan. From the start, Sibtain was an active member and aspired to take on a leadership role. However, the SPWCCI’s then-president refused to hold elections, preferring to maintain power. With CIPE’s support over the next three years, Sibtain advocated for good internal governance and encouraged the board to hold elections. Eventually her hard work paid off, and she was elected SPWCCI president in 2012.

That same year, Sibtain was selected as an early participant of CIPE’s South Asia Regional Women’s Economic Network program. In 2012, CIPE recognized that women in South Asia face systematic and institutional obstacles to accessing markets, finance, and capital, and set out to build a network of women’s business associations that could learn from one another and support one another as they take on deeply entrenched social and institutional norms constructed against women to start or grow their businesses. The network continues to thrive today.

Motivated to tackle the various governance issues within the SPWCCI, Sibtain attended her first CIPE workshop in Nepal in 2012. “I was in tears in Nepal. [I] lost hope that I would ever be able to make this chamber successful,” she remarked. But throughout four years of dedicated involvement in CIPE’s South Asia Women’s Economic Network program, Sibtain received invaluable mentoring from women leaders such as Selima Ahmad, president of the Bangladesh Women Chamber of Commerce and Industry (BWCCI). She also acquired skills, knowledge, and experience from intensive capacity-building workshops and technical assistance that CIPE provides to members of the network. 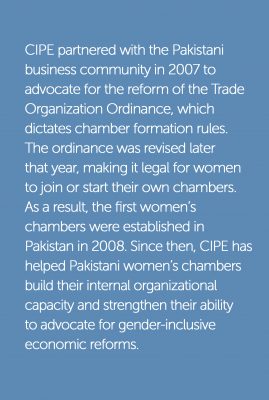 Sibtain quickly put into practice what she learned through the network. She told CIPE, “Our license [to operate as a women’s chamber] was about to be canceled. CIPE was teaching me how to fight for [a women’s chamber] and talk to different organizations [about why it was necessary]. It was a difficult time when no one was listening to us. CIPE encouraged us to run the organization in a strong way and organized many trainings to strengthen the Secretariat.”

Sibtain’s passion for leveling the playing field in Pakistan and advocating for gender-inclusive economic reforms is widely known. She was instrumental in boosting SPWCCI’s membership, which rose by 30% over the five-year period that included her presidency from 2015 to 2017. Today, the SPWCCI is entirely funded by member dues and other services the chamber provides—an impressive accomplishment for any chamber. The SPWCCI also successfully advocated to the State Bank of Pakistan, with Peshawar chamber, to lower the interest rate for export financing for artisans in Pakistan from 13% to just 6%.

Sibtain transformed her once struggling provincial chamber into a respected advocacy organization and a nationally recognized vehicle for economic reform. Due to that accomplishment and many others, she serves as a role model for women entrepreneurs in her country and across the region to successfully advocate for reforms that will allow anyone—regardless of gender—to realize their economic hopes.

Maria Philip is a CIPE Program Assistant for South Asia.

Listen to Sibtain discuss the important role that women’s chambers of commerce play in transforming Pakistani women from informal artisans to entrepreneurs.

Read about how CIPE supports women’s business organizations in Pakistan, Bangladesh, Nepal, Sri Lanka, and India in their efforts to push for changes to laws and regulations that work against women entrepreneurs.

Helping to Ease the Pandemic in Nepal