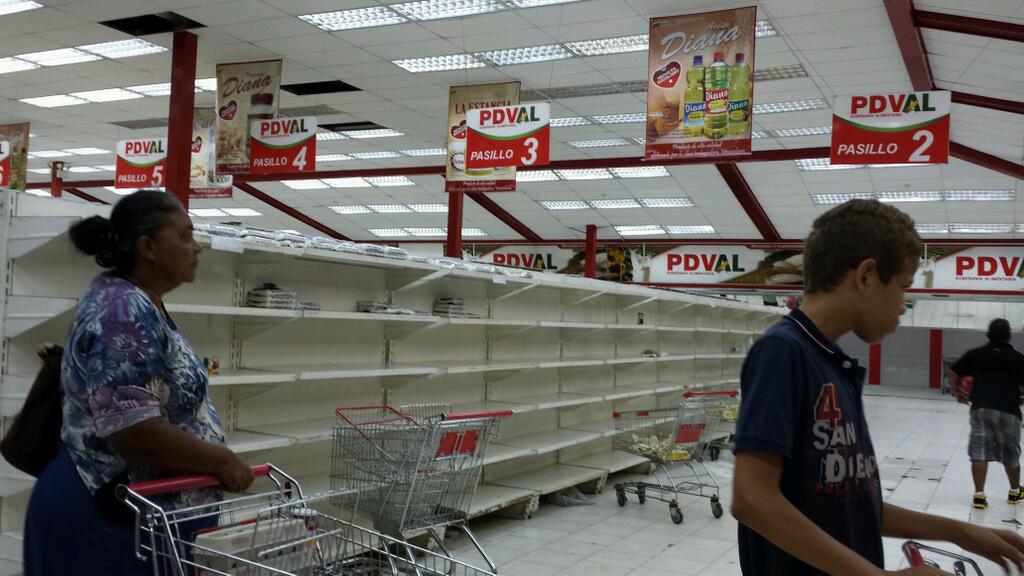 To anyone who has traveled frequently to Venezuela, the deterioration of the country is palpable. By day, people fear driving and getting stuck in traffic because motorcycle thugs will tap on their window, show a gun, and demand the handover of cell phones and cash. By night it is worse: going out on the town could involve robbery, kidnapping, and risk of death, so the streets are empty on Friday and Saturday nights in a city that previously boasted an active nightlife.

Shopping is another sad tale — commercial malls show a lack of maintenance, and stores have little merchandise. The common refrain you hear everywhere is “no hay,” or “there aren’t any.” You hear that when asking for anything from cell phones to toilet paper. You hear it in restaurants, too, where chefs somehow manage to figure out how to cook without basic staples such as cooking oil or flour.

If you can even get an airline ticket to Venezuela—international carriers are prevented from taking their profits out of the country, so they are curtailing flights—you will find prices depend entirely on the exchange rate you are able to obtain. If you change money at official rates you will pay $25 for a sandwich and a cup of coffee. If you are lucky enough to obtain the parallel exchange rate—which is running upwards of 10 ten times the official rate—the same meal will cost you $2.50.

How do Venezuelans cope with living this way? There are significant segments of society that still support the government of Nicolás Maduro despite its inability or unwillingness to tackle the huge economic problems the country faces, and which they have mostly caused. As the economy worsens, however, it seems unlikely that even the poorest segments of Venezuelan society who supported Hugo Chavez and now Maduro will continue to provide that support.

Recent public opinion polls confirm that trend. The polling firm Datos showed that 40 percent of government supporters blame the government for economic problems, while some 64 percent favor a change of government by constitutional means. Analysts expect inflation rates in Venezuela to top 80 percent this year, levels that no society can sustain without political upheaval. But to date the government has shown little willingness to address any of the overwhelming problems facing the country. Maduro’s government continues to be wedded to bankrupt socialist policies that have been rejected by most of the rest of the world.

Student groups have been some of the most radical opponents to Maduro’s policies, taking to the streets in protest. The government’s response to student demonstrations have been horrific, with documented cases of violence, rape, and torture of students shocking the world. Former supporters of the government in Europe and Latin America are being forced to rethink their positions, which is likely to put still more pressure on Maduro’s government.

Last week, the Center for the Dissemination of Economic Information (CEDICE), a well-known think tank in Venezuela and CIPE partner, held conference to celebrate its 30th year promoting market-oriented policies and democracy. Dissenting from government policies in many ways, the organization has come under considerable pressure and threats from the current government.

However, by focusing on cost-benefit analysis of government economic policies, CEDICE has managed to focus the attention of members of Congress, civil society, the media and even some government officials on the debilitating effects of the government’s ideology on Venezuelan society. The private sector has also been strongly critical of government economic policies even as it has chosen to engage in dialogue to change what policies it can, such as the violations of property rights that destroy the economic prosperity of the country. Since Hugo Chavez was first elected president in 1998, Fedecámaras, the peak business association of Venezuela, estimates that some 4,700 businesses have been eliminated in the country through confiscations and punitive policies toward business.

What will the future hold for Venezuela? Many fear—and some welcome—a nondemocratic military intervention. It is difficult to see how such a solution could lead to long-term resolution of the country’s divisions. Nobel Prize winning author Mario Vargas Llosa attended the CEDICE conference and commented that Latin America cannot trust military regimes to contribute to economic growth, much less to the democratic process to which most of the region is committed.

The only path out of Venezuela’s economic mess is through consensus building that will lead to the economic growth and democratic civil society enjoyed by many of Venezuela’s neighbors. Vargas Llosa recognized that there are deep divisions within the opposition to Venezuela’s current government, but this is a part of the democratic process. The only way they will be successful in resolving the country’s challenges is by staying unified in their voice and commitment to democratic principles.

John Zemko is Regional Director for Latin America & the Caribbean at CIPE.

Democracy that Delivers #283: COVID and Corruption In Latin America – Transparency Opportunities in Argentina