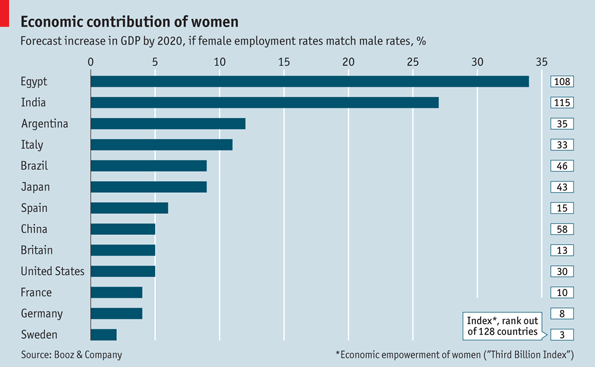 Supporting economic growth is an important and overarching goal for all countries worldwide. How countries go about doing so, however, particularly in the developing world, is a subject of much debate.

But a recent report by Booz and Company (as reported on by the Economist) indicates that there is one simple answer: women.

According to the report, if female employment rates matched those of men, Egypt’s GDP would grow 34 percent by 2020. While that is impressive on its own, imagine if other necessary reforms also took place, such as tackling Egypt’s food subsidies, or increasing Egyptian exports.

Egypt’s case is salient because of its largely untapped pool of female labor—Egypt’s female labor-participation rate is below 30 percent. But Egypt is not alone in the vast economic benefits possible by employing men and women at equal levels.

For instance India, the world’s second most populous country, has much to gain by employing more women. The Booz report indicates that India’s GDP would grow over 25 percent by 2020 if female employment matched male employment. Similarly, even countries solidly in the “developed country” category such as the United States, Britain, and France would see their GDP grow by 4 or 5 percent.

While this exercise may be hypothetical, it is certainly illustrative of the broader economic benefits of employing women. Women’s unemployment is not just a “women’s” problem. With the numbers behind them, countries that get behind empowering women in the workplace stand achieve significant economic gains, delivering more economic benefits to all.